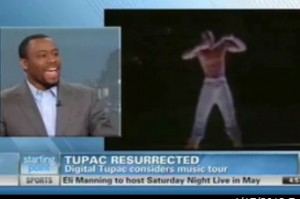 The appearance of a holographically resurrected Tupac Shakur at the Coachella Valley Music and Arts Festival continues to be the talk of the digital town, but the spectacle got an unusual review from Columbia University professor Dr. Marc Lamont Hill this morning. Hill took the widely-held opinion that the show was “creepy” a step further, saying it was “like necrophilia.”

The obvious question, then, is “What the hell does Marc Lamont Hill normally do at concerts?”

On CNN’s Starting Point this morning, the topic was news of a possible tour featuring the late rapper’s apparition (Rapparition™?), along with flesh-and-bone rappers Snoop Dog and Dr. Dre. Comedian and CNN contributor John Fugelsang cracked, “Don’t let Paul and Ringo know about this!”

Hill said “It’s creepy! It’s almost like necrophilia,” quickly adding, “Of course, I’m going to go see it! And I’ll talk about how creepy it was!”

Fugelsang opined that the creepiness factor is outweighed by the benefits. “A whole generation of young people that didn’t know his music, or lame white people who were not into it when it mattered, can get the experience.”

Host Soledad O’Brien apparently didn’t hear the “necrophilia” remark, so when Will Cain ratted him out later in the segment, O’Brien immediately said “Got to go!” as Hill tried vainly to explain himself.

This isn’t the first time there has been controversy over digitally re-animating a deceased star, although it may be the most amazing one to date. There have been some examples that were particularly crass, but as long as the deceased’s loved-ones are okay with it, I agree with Fugelsang, it’s a great way to expose people to art they would otherwise miss. Now, if only the police could resurrect some evidence and solve Tupac’s murder.