Marc Lamont Hill: ‘Yes,’ White House Heckler Was ‘Being Racist,’ But Might Not Know It
video

Marc Lamont Hill: ‘Yes,’ White House Heckler Was ‘Being Racist,’ But Might Not Know It 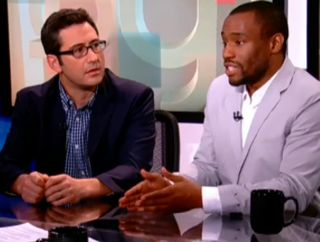 The way President Obama is treated in much of the media, particularly conservative media, was the topic on hand for Joy Behar this week as she mans the 8 PM hours at Current TV. Discussing radio host Barbara Espinosa calling the President a “monkey” and the Daily Caller‘s Neil Munro, Behar and her panel argued they were different types of racism, with Marc Lamont Hill saying that Munro was being racist, but “I don’t think he necessarily knows he was being racist.”

Behar asked Hill and Sam Seder about Munro’s interruption of the President, as well as Espinosa’s comments and the Rep. Joe Wilson “you lie!” moment, whether they were “some part of the trend.” “It’s called racism– that’s the trend,” Seder responded, “you have a black president and there’s a lot of racists and when they start getting angry about him, they don’t talk about the policy, they talk about his race.”

Hill answered “yes” to Behar asking, “do you think the guy in the Rose Garden was being racist?”, adding that he didn’t think Munro “necessarily knows he was being racist, though,” the way Espinosa does. “He just doesn’t think this president is worthy of dignity and respect in the way the other 43 presidents were,” Hill continued. He noted also that by pointing this out, he was exposing himself to people saying “you’re sensitive, you’re playing the race card,” which was why, to him, Espinosa was “so important”– she exposed “what that sentiment looks like when it’s fully developed and matured.”

Seder agreed about Munro, though he added that he was unsure if “it’s a function of his racism so much as, sort of, the latent racism of his audience… that doesn’t hold the same standards of deference to this president” and reacts positively to that behavior.

The segment via Current below: