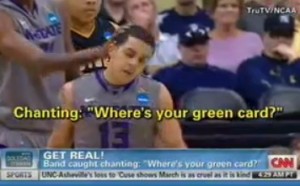 Things got ugly quick in the first round of the NCAA Basketball Tournament yesterday, as members of the Southern Mississippi band could be heard chanting “Where’s your green card?” to Kansas State guard Angel Rodriguez, who is Puerto Rican (that means he’s American). On CNN’s Starting Point Friday morning, conservative pundit Will Cain lamented the unfortunate juxtaposition of this story following a segment on Rick Santorum‘s Puerto Rico statehood gaffe, but aside from the superficial connection of the two stories, there is a deeper relationship between them.

The Southern Mississippi band leader reportedly put a stop to the chant, and the university released a statement, rather unfortunately misspelling Rodriguez’s name (which they later corrected) apologizing for the ugly incident.

Of course, the immediate reaction to this is revulsion, but my second thought was “You’re in the band! Are you really in a position to talk trash of any kind?” (My third thought was “How do you root for a basketball team called Southern Miss? Isn’t that like rooting for a football team named Northeastern Fumble-aya?”)

On Friday morning’s Starting Point, show regular Will Cain objected to the optics of following a segment on Rick Santorum’s Puerto Rico statehood kerfuffle with a segment on this racist incident (bumpered by Cain’s musical selection of The Gipsy Kings‘ awesome Spanish-language cover of Hotel California)

“I got to tell you, I don’t like this position of this story following the one that we just did,” Cain said, which host Soledad O’Brien pointed out was “unintentional, by the way.”

“The last segment we did,” Cain continued, “the conversation over language was not one about xenophobia and what some people take to racism, and this story we’re doing right now is much more legitimately about that.”

O’Brien responded that there is a common thread: ignorance about Puerto Rico. “You could argue this story is also in part people not understanding what it means to be from Puerto Rico. Like,  green card — well, they’re also being horrifically awful to a young man trying to shoot a free throw. But at the end of the day, you don’t need a green card. What’s going on earlier in the debate is not understanding the dynamics of Puerto Rico.”

In my view, they’re both missing the very real, very deep connection between these two stories. As I asked in my earlier column, even granting that Santorum was only identifying a practical reality about the use of a common language in addition to native tongues, who was the audience for those remarks? When he’s asked if he supports statehood for Puerto Rico, in Puerto Rico, where English proficiency is high and official business is already done in English, why bring it up? Why not just say “I support Puerto Rico’s right to self-determination,” and be done with it? Who was the audience for that answer?

People like those Southern Miss band members, who delivered Santorum key victories over Mitt Romney this week, are the audience for those remarks. This is the essence of dog whistle politics, the use of remarks that have an innocuous veneer, but which speak loud and clear to a less desirable element of the electorate. There’s no reason to bring English up in that context, and while the innocent, good-hearted likes of Will Cain honestly don’t hear xenophobia in comments like these, those Southern Miss racists got the message.

Unfortunately for Santorum, or whoever the eventual nominee is, Hispanic voters are getting the message, too. The Republican candidates can pay lip service to their appreciation for immigrants all day long, but both of these audiences are going to hear the dismissive talk of “illegals,” and the policy goal of shipping them all out, splintered families or not.

This is at the very heart of the Republican Party’s perception problem with race: people of good will, like Will Cain, have a blind spot for race-baiting in their midst, because they’ve never been on either end of it, receiving or giving. While practitioners of dog-whistle politics may be getting rarer, it is the failure of decent conservatives to recognize it that alienates people.

Will Cain and I traded tweets yesterday on the subject of English as the official language, so I’d like to take a minute to clarify my thoughts on the issue. It makes all the sense in the world that we, in this country, do business in a common language, which is English. It’s also true that some immigrant populations would benefit from greater English proficiency. But these are things that we (people like Will Cain and I) don’t need a law to solve, or codify. I don’t think Will believes that courts and other public institutions should cease to accommodate people with less-than-proficient English skills. However, since English is already the common language used in this country, what other practical purpose would such a law serve?

Aside from opening the door to destructive measures like English-only courts and public documents, such a law would send the message that other languages, like Spanish, are at best unwelcome, and at worst, inferior. Now, that’s a trade I might be willing to make if there were some greater good to be served, or some more grievous ill to be solved, but that’s simply not the case.