Marco Rubio Artfully Dodges Yes or No Question on Marijuana 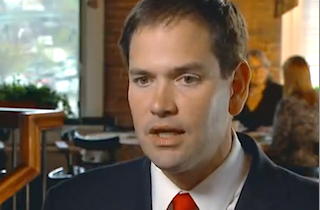 President Bill Clinton said he smoked marijuana but “didn’t inhale.” President Barack Obama wrote about his time in his high school “Choom Gang” and said inhaling “was the point.” So with more and more states adopting medical and even recreational marijuana legalization, why won’t potential 2016 presidential candidate Marco Rubio just answer the simple question: Has he ever tried the drug?

On Monday, ABC News released an outtake of Jonathan Karl’s interview with the Florida Republican in which he flat refuses to answer “yes” or “no” when asked if he has smoked marijuana.

“On the other side of it is, if you tell people that you didn’t, they won’t believe you.” That is quite a catch-22.

“We’ll believe you,” Karl assured the senator. “If you didn’t, you can just say you didn’t.”

While Rubio would not reveal anything about his own personal experience with marijuana, lest he be considered a deviant and/or a liar, he was more than happy to share his current opinions of it. “The bottom line is, I don’t think people should smoke marijuana,” he said.

Another question on which Rubio was willing to get specific, was the issue of whether the government should enforce the federal prohibition on marijuana even in states where it is legal. He said emphatically that the feds should step in and override state laws in those cases, something that Eric Holder’s Justice Department has mostly avoided doing in recent years.

After comparing marijuana to alcohol, Rubio argued, “When something is legal, implicitly, what you’re saying [is] it can’t be all that bad, because if it’s legal, it can’t be bad for you,” Rubio said. “And the bottom line is, I believe that adding yet another mind-altering substance to something that’s legal is not good for the country. I understand there are people that have different views on it, but I feel strongly about that.”

Besides the fact that Rubio’s insistence that the federal government come in and bust states that have decided to legalize the drug might not play too well with conservatives who “feel strongly” about states’ rights, his blatant refusal to answer the simple question about his own experience demonstrates just how disingenuous he’s being on the issue.

If he really has not used the drug in his life, he should, based on his own assertions, be perfectly comfortable standing up and setting what he believes to be a good example for the children of America. Similarly, if he has experimented with marijuana, he should be brave enough to be honest about it and say it was a youthful mistake he regrets.

But Rubio is right in one sense. If he did admit to smoking marijuana in his past, it would disprove the point he’s trying to make. Just like Clinton and Obama before him, it would mean that someone could both recreationally relax with a joint and rise to the highest levels of power in this country. Then, how could Rubio justify his draconian anti-marijuana stance?