Marco Rubio Blasts Trump Over Chicago Debacle, Will Still Support Him Though
Opinion

Marco Rubio Blasts Trump Over Chicago Debacle, Will Still Support Him Though 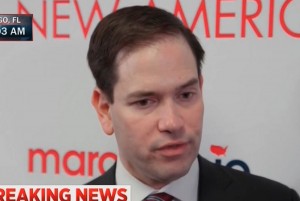 Florida Senator and fading presidential hopeful Marco Rubio spent part of Saturday morning railing against Donald Trump and the ugliness of his rallies, which culminated in a surprise cancellation Friday night due to widespread protests and clashes with Trump supporters. In fact, aside from a few detours to slam President Obama, Rubio spent a full ten minutes waxing apocalyptic about the effect of Trump’s candidacy on the Republican Party, and on America.

But then, after describing how Donald Trump is destroying everything he believes in, Rubio was asked if he would still support Trump if he is the eventual Republican nominee. Here’s how that went:

Rubio: I believe Donald Trump as our nominee is going to shatter and fracture the Republican party and the conservative movement. I think it’s already having that function. I think a Donald Trump presidency, you know, would be more along those lines apparently. But right now I’m focused on what does this mean to the political discourse, and more importantly the rope of the Republican party and the conservative movement discourse.

Reporter: …Will you still support him if he’s the nominee?

Rubio: I don’t know. I mean, I already talked about the fact that I think Hillary Clinton would be terrible for this country, but the fact that you’re even asking me that question, I still at this moment continue to intend to support the Republican nominee, but it’s getting harder every day.

Maybe Trump is right, maybe he would have to shoot somebody in the face on Fifth Avenue before he’d lose Rubio, let alone any supporters.