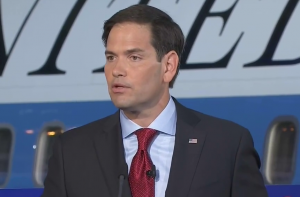 Now that Donald Trump has started attacking GOP rival Marco Rubio‘s foreign policy chops, it’s worth noting that the Florida Senator accurately predicted how Vladimir Putin’s Russia would carry out airstrikes in Syria weeks ago, and how he’d use it to gain support of key Mideast allies.

Here’s what you’re going to see in the next few weeks: the Russians will begin to fly combat missions in that region, not just targeting ISIS, but in order to prop up Assad. He will also, then, turn to other countries in the region and say, ‘America is no longer a reliable ally, Egypt. America is no longer a reliable ally, Saudi Arabia. Begin to rely on us.’

What he is doing is he is trying to replace us as the single most important power broker in the Middle East, and this president is allowing it.

On Wednesday, Russia indeed began carrying out airstrikes in Syria, ostensibly to fight ISIS. But the United States quickly confirmed that the target of the strikes was not ISIS, but moderate Syrian factions opposed to dictator Bashar al-Assad.

At least the second part of Rubio’s prediction hasn’t come true yet, the part where U.S. allies turn to Russia instead of…