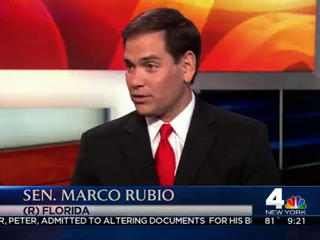 Florida Senator Marco Rubio was in New York this week to promote his book and, in the process, reacted to the Supreme Court’s other big decision this week– to uphold parts of Arizona’s controversial immigration law. While he admitted he was “not very happy” about the law initially (it passed while he was still running for office), he told WNBC New York’s Lynda Baquero he now understood that “Arizona has a very unique situation,” one that must be respected in light of their criminal problem.

“I had very mixed feelings about it,” he explained, “I was not very happy about it because… it could lead to profiling.” He warmed up to the bill because it was amended to add a specific non-profiling provision, and he argued the more he read about it, the more he understood why the law came to be. “It’s important for those of us who don’t live in Arizona to understand that Arizona has a very unique situation,” he explained, “it’s not just about immigration, it’s about criminality.”

Because this is an interview with Sen. Marco Rubio, there had to be a question about the veepstakes, and he didn’t answer it. He also noted that he had once lived in New York, but “something about Cubans and snow didn’t mix [ed. note– that’s why we all moved across the Hudson River to New Jersey].”

The segment via WNBC New York below: