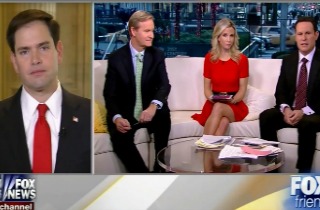 Sen. Marco Rubio appeared on Fox & Friends on Thursday to discuss Republicans’ push to address issues of poverty and inequality. In contrast to President Barack Obama—who, along with other Democrats, have focused on “income inequality” issues like raising the minimum wage and extending long-term unemployment benefits—Rubio and fellow Republicans are leading a charge to address poverty issues in a conservative fashion.

Rubio chided Obama, saying that “income inequality” is intractable, but economic mobility should be an American value. “The only solution to long-term unemployment is employment,” he said. “I want us to make reforms to that program that don’t just give people a check, but give them access to training so they can become employed again.”

Rubio pivoted to his and the Republicans’ approach to poverty which will contrast with the president’s renewed approach to dealing with that problem.

“The president’s focused on income inequality — the difference between the rich and the poor and the gap that’s grown,” Rubio said. “That’s the wrong focus.”

“The issue is not whether the cashier at Burger King makes less than the CEO,” he added. “The issue is whether that cashier gets stuck being a cashier for five, ten, 15, 20 years and can’t move up.”

Rubio said that the government must focus on “opportunity inequality.” He later added that the president’s push to address poverty is an effort to redirect the public’s focus away from the issues associated with the implementation of the Affordable Care Act, but he conceded that opportunity inequality is a genuine problem the government needs to address.

“But if the president’s proposal for dealing with this problem is raising the minimum wage and taxing rich people? That’s a solution to what he called the defining issue of our time?” Rubio asked. “That’s not a solution. That’s the same tired, stale rhetoric and policies that have failed for 50 years.”