Marco Rubio to Trump: We Already Have a President with No Class 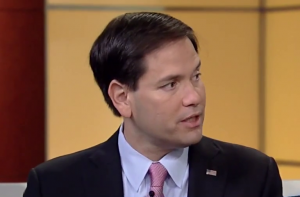 Republican presidential candidate Marco Rubio took a shot at Donald Trump during an appearance on Fox and Friends, saying the presidency didn’t need another man with no class.

When asked about Trump, Rubio agreed that illegal immigration was a serious issue, but that Trump was the wrong man for the job. “Here’s what’s so important to me; the presidency of the United States is not just the top government official. It is the leader of our people and our nation as well.”

“It’s important we have– to conduct the presidency, it has to be done in a dignified way, with a level of class,” he said. “I don’t think the way he’s behaved over the last few weeks is either dignified or worthy of office he seeks.”

But Rubio brought it back to Trump in the end. “It’s important to have a presidency that restores dignity and class to the White House. And I don’t believe that some of the language Mr. Trump is employing is worthy of the office. I just do not.”