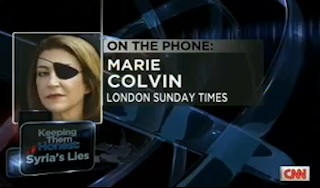 Respected war reporter Marie Colvin, who was covering the conflict in Syria for the London Sunday Times, was tragically killed in a shelling attack on Wednesday. Just Tuesday, only hours before her death, she gave a chillingly detailed report to CNN’s Anderson Cooper about the situation on the ground, detailing how she witnessed a baby die of shrapnel injuries.

“Why is it important, do you think, to see these images? Why is it important for you to be there?” Cooper asked Colvin, who was reporting on much of the violence in the city. “You may be one of the only western journalists in Homs. Our team has just left.”

“Yes, I had a discussion with your people, Anderson. I feel very strongly they should be shown. Something like that, I think, is actually stronger for an audience — for someone who is not here, for an audience for which the conflict, any conflict is very far away. That’s the reality,” Colvin observed. “These are 28,000 civilians — men, women and children — hiding, being shelled defenseless. That little baby was one of two children who died today, one of children being injured everyday. That baby probably will move more people to think, what is going on and why is no one stopping this murder in Homs that is happening everyday?”

“The regime in Syria claims they’re not hitting civilians,” Cooper explained. “That there is no armed conflict, no war inside Syria, that they’re just going after terrorist gangs.”

“Every civilian house has been hit. we’re talking a poor popular neighborhood. The top floor of the building I’m in has been hit, in fact, totally destroyed,” Colvin told Cooper. “There are no military targets here. There is the free Syrian army. Heavily outnumbered and outgunned only Kalashnikovs and rocket propelled grenades. They don’t have a base. There are a lot of young men killed, teenaged young men, and they’re trying to get the wounded to some kind of medical treatment. It’s a complete and utter lie they’re only going after terrorists.”

“Thank you for using the word ‘lie,'” Cooper said. “I think a lot of people will thank you. It’s a word we often hear, not often used, the truth in this case. The Syrian regime and their representatives have continued to lie and lied on this program directly. You have covered a lot of conflicts for a long time. How does this compare?”

“This is the worst, Anderson, for many reasons, I think the last time we talked when i was in Misrata. It’s partly personal safety, I guess, there’s nowhere to run,” Colvin said.

Watch Colvin’s final report to Cooper below via CNN: