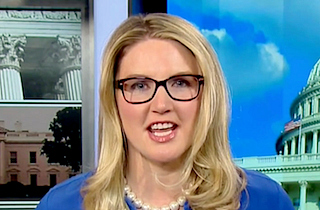 Earlier on Morning Joe, General Michael Hayden suggested State Department spokesperson Marie Harf might “want a mulligan” on her comments about ISIS on Hardball two days ago, in which she said the U.S. “can’t kill its way” out of militant extremism, and in fact needed to increase economic opportunities for disaffected Middle Eastern youth to foreclose the prospect of joining radical groups.

Criticized for the remarks, Harf she stuck by them on CNN last night, and declined Morning Joe’s offer of a mulligan Wednesday morning.

“I’m not sure I would take a mulligan on this one, but I think he went on to say something I would agree with,” Harf replied. “In the short term — and I said this on Hardball — we are killing them and will continue killing ISIS terrorists that pose a threat to us. We’re very good at that. General Hayden can to speak to that better than anyone.

“But in the longer term, and this isn’t specific to ISIS, military commanders, politicians of both parties, counterterrorism experts all agree that if you’re going to prevent terrorist groups from spreading to other places and getting more recruits, you have to look at root causes that can lead people to extremism. You have to do it all it. You have to take them on military, but you have to look at things like governance, like opportunity, so these groups aren’t able to get more people to their cause.”

“No mulligan taken,” host Mika Brzezinski said. “I get it.”