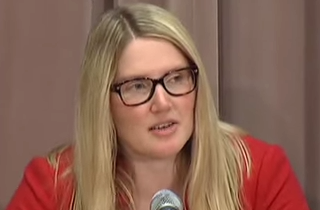 You may recall that last month, State Department spokeswoman Marie Harf said that the U.S. can’t just beat ISIS by killing them, that there are other factors like employment that need to be considered. Well, those remarks did not go over so well and Harf was ridiculed all over the conservative media for those remarks.

She responded by saying her remarks were “too nuanced” for critics and completely stood by what she said, but new video discovered this week shows Harf further going off on all the criticism for what she again said were “totally uncontroversial” remarks.

Harf spoke at an HBCU foreign policy conference earlier this month and was asked about her biggest mistake on the job. She brought up that now-infamous comment about ISIS and said she was very surprised at how “it exploded” online and on TV.

And Harf said this was a point of reflection for her:

“It’s instructive that in today’s media climate, anything you can say can set off––I had people tweeting the meanest things you can imagine. And it’s not based on what I said, most of it, it’s often based on how I look or how old I am or that I’m a woman, which makes it even worse.”

And you can watch Harf’s ISIS remarks in question here, via MSNBC: