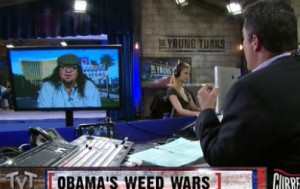 Magician and former Bullsh*t host Penn Jillette has been on a tear lately over President Obama‘s flip attitude about federal marijuana policy, blasting the President during his podcast and pounding the issue home on Fox News’ Hannity. It may surprise you, then, to learn that Jillette has never consumed drugs or alcohol, as he told The Young Turks‘ Cenk Uygur Wednesday night. That didn’t prevent Penn from making his case like his next doobie depended on it (do the kids still say “doobie?”).

After some promising early signals on marijuana enforcement, the Obama administration’s actions haven’t come close to measuring up to candidate Obama’s words, causing significant outrage among some of those affected by drug policy (a larger set that includes everybody).

Cenk began the interview by asking, “So, Penn, I think a lot of people who saw that rant thought, ‘Boy, what was he on?'”

Penn laughed and said “Well, you know, it’s always important to point out that I’ve never had a drink of alcohol or any recreational drug in my life. I didn’t even hold marijuana up to my lips and not inhale,” a dig at another president’s marijuana use (or misuse, if you ask me).

“I’m totally clean and sober my whole life,” he added, “but I just don’t like paying money to put potheads in prison.”

Like our own pro-‘dro editor Andrew Kirell, Penn points out that the only thing standing between Barack Obama and a life ruined by a prison record is that he didn’t get caught.

“Even if I disagree with Obama on many, many things,” Penn said, “he is certainly qualified to be president. He is certainly competent to be president. And yet, under the very laws that he kind of chortles about, he would not be our president if he had been arrested for his marijuana and maybe a little blow when he was younger.”

While he acknowledged that the President doesn’t make the laws, Penn took exception to the lighthearted way that Obama, and others, treat the issue. “At least don’t laugh about the number of people who are having their lives ruined,” he said. “I mean, we have people of the quality of Obama and Steve Jobs and all these people who we’re throwing into prison and ruining their lives for marijuana, which everybody laughs about and everybody in the world seems to have done except for me.”

Cenk observed, “Yeah, you know, you’re a strange dude. You’re a guy who doesn’t do drugs who is really mad about marijuana not being legal and you’re the only person in Vegas, certainly the only non-Mormon in Vegas, who doesn’t drink or do pot. WHAT ARE YOU DOING?”

Asked why he was suddenly so incensed about this issue, Penn said “Oh, there’s no particular reason except that the day before my podcast, I was driving home and I heard on a radio station them replaying him talking to Jimmy Fallon. And I know Jimmy Fallon, he’s a friend, I love him. But just the idea that Obama can be so jovial, so hip and so with it. Even using words like, you know, ‘weed.’ And using that kind of terminology and just kind of laughing and being one of us–yeah, we all do drugs. I just thought about, if I were a parent whose child was doing time for marijuana, how could he laugh about that?”

As a longtime fan of Penn & Teller’s Bullshit, which was entertaining even when it was itself bullshitting viewers, I came to learn of Penn’s libertarian leanings, most of which I disagree with. In this case, I do agree, but I also find it refreshing that he has taken up this issue even though it’s not in his direct self-interest. It’s also rare that a crusader against marijuana enforcement eschews the easy emotional appeal of medical marijuana patients.

Speaking of which, though, Penn’s gripes with the President are fair, but he ought to take a look at the guy he’s running against. While President Obama’s actions haven’t caught up to his words, Mitt Romney only seems to have two words for those in need of medical marijuana. Guess what those are.