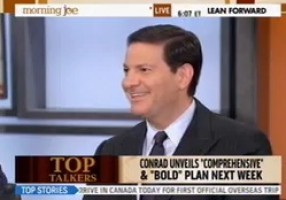 In the event that anyone think that Morning Joe is becoming formulaic and predictable, I present the following clip. While discussing President Obama‘s press briefing yesterday (in which he showed a feisty, if not combative style), host Joe Scarborough asked regular contributor Mark Halperin what he thought of the President’s demeanor . After being assured that the show was on a seven second delay, Halperin called it like he saw it, saying “I though he was kind of a dick yesterday.”

A rough transcript of the exchange (via TVeyes):

Joe Scarborough: Mark Halperin, What was the president’s strategy? We are coming up on a deadline and the president decided to please his base, push back against the Republicans.I guess the question is, we know a deal has to be done. Is this showmanship? A lot of times you go up there and both sides and they act tough so their base will be appeased, then they quietly work the deal behind the scenes.

Mark Halperin: Are we on the seven second delay?

Halperin: I wanted to characterize how the president behaved.

Scarborough: We have it. We can use it. Go for it. Let’s see what happens.

Brzezinski: We’re behind you, you fall down and we catch you.

Halperin: I thought he was a dick yesterday.

Scarborough: Delay that. delay that. what are you doing? i can’t believe — Iwas joking. Don’t do that. Did we delay that?

Halperin: I said it. I hope it worked.

Scarborough: My mom is watching! We’ll know whether it worked or not.

Shortly after the incident, a chagrined Halperin apologized to the audience and later expressed a similar sentiment via his Twitter feed: 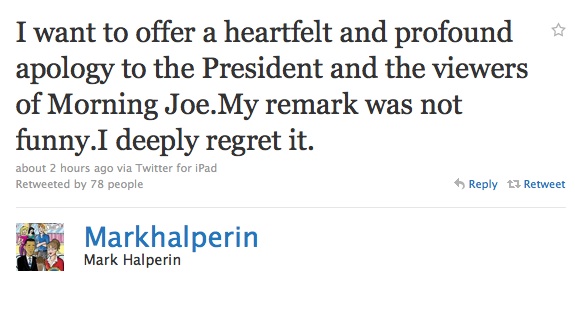 Mark Halperin’s comments this morning were completely inappropriate and unacceptable. We apologize to the President, The White House and all of our viewers. We strive for a high level of discourse and comments like these have no place on our air. Therefore, Mark will be suspended indefinitely from his role as an analyst.

I completely agree with everything in MSNBC’s statement about my remark. I believe that the step they are taking in response is totally appropriate. Again, I want to offer a heartfelt and profound apology to the President, to my MSNBC colleagues, and to the viewers. My remark was unacceptable, and I deeply regret it.