Mark Halperin Changes Mind: Thanks to Email Story, Hillary’s ‘Not Going to Be President’ 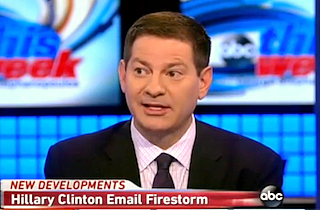 The fallout from the revelation that Hillary Clinton used a personal email account as Secretary of State has been so damaging that at least one political prognosticator thinks it may have cost Clinton the White House.

“Because of her emails?!” Nicolle Wallace said.

“What she’s doing here in terms of lack of response, lack of a sense of what people think of her, combined with what I thought was an extraordinarily weak performance at the Emily’s List speech the other day — her husband can get through this because he’s the politician of a lifetime. She cannot. If this is the way she’s going to run her operation, if this is her mindset, I don’t think she’s going to be president.”

Halperin and Wallace disagreed over the political impact of the story (to be distinguished from the legal ramifications if it turned out Clinton violated federal regulations). Halperin said even the appearance that Clinton tried to avoid subpoenas with her personal email account was devastating, while Wallace argued Clinton’s more general gaffes, such as saying her family was “flat broke” upon leaving the White House, would be far more damaging with the average voter. Halperin did concede that Clinton still enjoyed numerous advantages as the putative Democratic frontrunner.

Incidentally this might be received as good news at Clinton headquarters, as Halperin and predictions? Not so much.