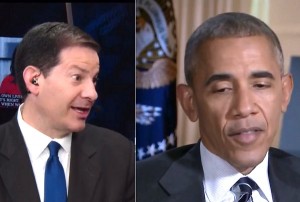 Republican presidential nominee Donald Trump has generated one of his patented flurries of headlines by suggesting that the Russians should hack classified government emails, but according to MSNBC and Bloomberg pundit Mark Halperin, it’s President Obama who’s guilty of dirty dealings. Liberal media watchdog Media Matters flagged an exchange from Halperin’s With All Due Respect program, and accused him of creating a “false equivalency,” but what Halperin actually did was worse than that: he flat-out falsely accused the President of something he did not do:

Mark Halperin: They have walked it back. On the other hand, and again I think what Trump said was ridiculous and the failure to condemn — but the president of the United States is engaged in pure politics for political favors. Democrats have been for the past two days suggesting that Trump’s position on Putin, or his position on NATO, suggests that we need to look into some connection between the leaking of these e-mails and the Trump campaign. There is no evidence of it, and the president of the United States shouldn’t be doing that.

John Heilemann: There is no evidence of collusion, but it is the case —

Mark Halperin: But that’s what he’s trying to suggest, just as the Clinton campaign has.

John Heilemann: But it is the case. I think what he said was very careful. He said, basically it seems like Donald Trump has praised Putin publicly on multiple occasions —

Mark Halperin: What does that have to do?

John Heilemann: It has to do with what Putin’s motives would be to meddle in an American election.

Mark Halperin: Right, but they’re not talking about Putin’s motives. The Democrats are trying to suggest there is some collusion. They are, that’s what they are doing. And it’s hardball politics, but if our job is to hold both sides accountable, I’ve got to say both sides have dirty hands on this.

John Heilemann: There is — I have not heard anybody suggest collusion.

Halperin’s better half tried to correct him, then gave up, but John Heilemann is correct, President Obama in no way suggested collusion. Here’s what he actually said about the subject, to NBC News’ Savannah Guthrie:

Suggesting that Putin is rooting for Trump, and is even trying to influence the outcome of the election, is not remotely an accusation of “collusion,” which would require action om the part of Donald Trump. What Halperin is saying isn’t just false equivalency, it’s just plain false.