Mark Halperin: ‘Media Is Very Susceptible To Doing What The Obama Campaign Wants’ 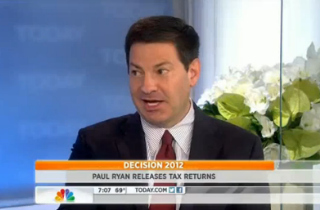 On Saturday’s edition of NBC’s Today Show, host Lester Holt asked NBC political analyst Mark Halperin whether the debate over Republican presidential nominee Mitt Romney‘s tax returns has “jumped the shark.” Halperin responded that the story still exists largely because “the press still likes this story a lot,” and “the media is very susceptible to doing what the Obama campaign wants, which is to focus on this.”

Despite this, however, Halperin argued that the economy and Medicare will be more important issues for voters, with the tax returns only being something “that the press and insiders care about.”

“The Obama folks clearly know they found some traction on this tax return issue with Romney,” Holt said, then asking Halperin: “Has this issue come to the point it’s jumped the shark?”

“I think the press still likes this story a lot. The media is very susceptible to doing what the Obama campaign wants, which is to focus on this. I don’t think there’s any chance, at this point, you saw Ann Romney on Rock Center saying that’s it, we’re not putting out any more. He does have one more year of returns coming. Last year’s returns will be out in a few weeks. I’m pretty sure that’s all he’s going to put out.”

“Do voters care about it? I don’t think so,” he added, concluding that “The economy is still top, front, and center. The Medicare debate’s important. I think it’s mostly something that the press and insiders care about. It’s an important issue about transparency, but there are other bigger issues in the campaign, I think.”