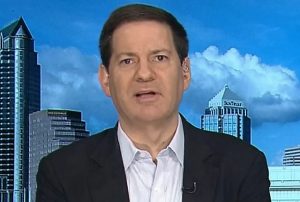 You’ve got your “basket of deplorables,” your “half that don’t do anything,” and now, you’ve got your “real people,” whoever they are. On Thursday morning’s Morning Joe, the crew was discussing Donald Trump‘s recent “solution” to his years-long string of lies about President Obama‘s birthplace, which was to string together even more lies, when MJ regular Mark Halperin made a somewhat enigmatic observation.

Host Joe Scarborough opined that Trump’s latest Birther performance appears to have softened his support in recent polls, and for some reason, Halperin wondered just how much “real people” had been paying attention, even as he asserted that Trump still has some explaining to do about the controversy:

You know, I’m not sure how much real people even paid attention to that back and forth. I’ll correct you. You said it was a press conference. As we know, it wasn’t. It was a statement, supposed to be a press conference. And the only reason I bring that up is, except for talking to Fox News, he’s not talked to any other media that I know of about this. I still think he’s got more explaining to do because of the sensitivity of the issue, because of the dark blot on his mark for the position he held for so long against the facts.

I’m not sure who it is Halperin thinks are “real people” and who are not, but he ought to be well-acquainted with the folks who care about the Birther smear, from both sides of the issue. They’re the same people Halperin heard from after he called President Obama a “dick.”