Mark Kelly On Fox Presses For Background Checks: ‘This Isn’t About The Second Amendment Anymore’
video

Mark Kelly On Fox Presses For Background Checks: ‘This Isn’t About The Second Amendment Anymore’ 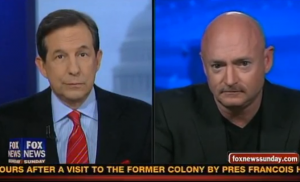 Mark Kelly, husband of former Rep. Gabby Giffords, spoke to Chris Wallace on Fox News Sunday this week, reiterating his support for universal background checks and responding to the NRA’s anti-gun control arguments. Simply put, Kelly said, less people would die due to gun violence if the legislation were put in place.

Wallace looked to the example of Jared Loughner, the gunman who opened fire in Arizona, killing and injuring many, including Giffords. He passed a background check, Wallace noted.

Loughner clearly was mentally ill, Kelly said — and if his condition was entered into the background check system, presumably he would not pass. Arizona, he said, hadn’t entered 121,000 records into the system, and that could certainly make a difference given that 1.7 million have been rejected since 1999.

Wallace further asked what difference a limit a restriction on high-capacity magazines would be make. Kelly replied that it does matter, because the time spent reloading is time for others to restrain the person.

Next on the list was the controversial assault weapons ban, which the NRA’s Wayne LaPierre vehemently opposes. Previously, LaPierre has said, the ban didn’t work, so it’s not necessary now.

“I don’t know if it worked or not,” Kelly said. “I haven’t at all the statistics. Common sense tells me that if it is much more difficult for criminals and the mentally ill to get assault weapons and high-capacity magazines and guns in general, we will save lives.”

Having served in the military, Kelly said he knows the value of assault weapons — in when used in mass shootings, more people die. He did agree with LaPierre that many gun laws need to be better enforced, but also asserted the need to close the gun show/private seller loopholes.

“This isn’t about the Second Amendment anymore,” Kelly said. “This is about public safety.”

There isn’t sufficient legislation, he continued, leading Wallace to point out the NRA’s political clout and ask how much, realistically, can be achieved on the gun control front.

Both sides of the aisle agree we need to do something, he said. It’s not going to be easy, but we need “common sense” answers. “I know the value of an assault weapon, and it’s to kill a lot of people very quickly,” Kelly added.

Asked for his message, “man to man,” to LaPierre (who was on in the next segment), Kelly said: He’ll say background checks don’t work, but that’s not true.

“I hope Mr. LaPierre can think about what would his members want,” he said. “Seventy-four percent of NRA members think it is a very reasonable thing to do to have a background check before buying a gun. … I hope he would listen to his membership because members of the NRA tend to be very reasonable on this issue.”