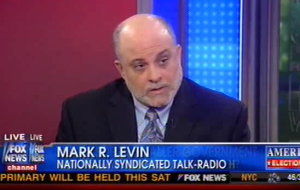 Popular conservative radio host Mark Levin was a guest on Fox and Friends Tuesday morning, ostensibly to promote a new book, but he got into topics ranging from Mitt Romney‘s popularity to the GOP’s misguided obsession with Ronald Reagan. But first, the hosts wanted to know what Levin thought of Monday night’s debate.

“Nothing really changed,” Levin said. “Newt’s a good debater, Santorum’s a good debater, Romney’s a good evader, and Ron Paul wants to unilaterally disarm. So I think I’ve got all the positions down.” Levin said that if he could vote now, he’d go for Santorum, “because he’s the most consistent conservative.”

On the current GOP front-runner, Levin said that Romney’s been painted with a somewhat false brush. “I wouldn’t exactly say Mitt Romney’s mister capitalist,” Levin explained. “He supported TARP, which was the biggest bailout in American history of business.” Levin suggested, though, that people didn’t want to hear about that topic any more. “You know what’s killing this country? The government’s killing this country, not Bain Capital and not the private sector.”

Guest co-host Eric Bolling noted that, during the debate, Newt Gingrich seemed to shine when he moved the discussion away from Bain Capital attacks and focused instead on President Obama. Levin took this opportunity to affirm his belief that this country doesn’t need a Ronald Reagan clone, even though everyone keeps bringing up his name.

“We don’t have to have Ronald Reagan,” Levin explained. “What we want is an articulate, consistent, confident, relatively charismatic conservative. He’d wipe up the Republican primary, he’d wipe up the election. Obama is low-hanging fruit, his record is a disaster, his philosophy is a disaster.”

Levin finished the segment by pointing out that Romney needs to lock up some more support quickly, or he’ll be chasing independents in the general election (assuming he wins the nomination), many of which are conservative Tea Partiers, who have yet to warm to the former Massachusetts governor.

Watch a clip of Levin’s appearance below, courtesy of Fox News: