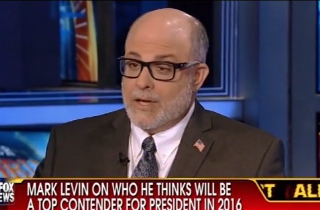 While sitting down for a lengthy interview with Fox’s Neil Cavuto this afternoon, talk radio host Mark Levin sized up the potential candidates for the 2016 presidential election, most notably claiming former Secretary of State Hillary Clinton is “Barack Obama in a dress.”

Cavuto pressed Levin on why he once said he wouldn’t know for whom to vote if the race came down to Republican Gov. Chris Christie and Clinton. “I would never vote for Hillary Clinton,” Levin clarified. “With Barack Obama, I would rather vote for an orange juice can.”

He continued: “Hillary Clinton is Obama in a dress.”

As for Christie, the conservative talker said, “I will do everything I can to make sure he is not the nominee” because he is a “Gerald Ford Republican” who governs a state that is “still a financial disaster.”

Christie’s conservative credentials are weak, said Levin, because he “didn’t sign on to challenge Obamacare”; he is supportive of “amnesty” for illegal immigrants; he is a “greenie” when it comes to the Environmental Protection Agency; and he “signed 10 out of 15 gun control laws.”

“If we keep nominating moderates from the northeast,” Levin warned Republicans, “we’ll keep getting our lunch handed to us.”

“I like the conservatives and the more conservative, the better. Ted Cruz. I like Mike Lee. I like Rand Paul. I like, well, that may by be it. There’s some governors I like. Walker has been pretty good and a few others. I’m not here to nominate anybody. I’m here to say: America, it’s time to put Nixon, Ford, Rockefeller, Scranton behind us or we’re going to get our lunch handed to us again.”