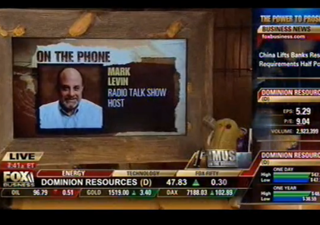 In the early days of the Greek tragedy now known as “Weinergate,” many wondered whether the scandalous photo tweeted from Rep. Anthony Weiner‘s account were actually of the Congressman’s genital region. While, by his own admission, the possibility that it was anyone else was slain a week ago, some still have their doubts: mainly radio host Mark Levin, who told Don Imus today that he wasn’t entirely sure the photo wasn’t of President Barack Obama.

Imus opened up the segment on Rep. Weiner asking Levin if he had heard the President’s comments on the matter. Levin, in attempting to make the point that President Obama speaks of himself so often that it often becomes difficult to disassociate him from the topic he is talking about, then asked “are we sure it’s not him?” Specifically, Levin referred to President Obama’s comment that, “if I were [Rep. Weiner], I’d resign.” Levin’s question seemed to catch Imus off-guard, so he repeated his question, adding “even when it comes to Weiner’s wiener, Obama talks about himself.” He added, “if it’s him and he’ll resign, I say we make sure it’s not him.”

“I think we know it’s not him,” Imus responded, somewhat bemused, to which Levin replied, without skipping a beat, “Who the hell knows?” “I do,” stated Imus decisively. Levin continued with this line of attack for several minutes more, with Imus attempting to soften the blow of accusing the President of being the man in Rep. Weiner’s saucy photos by noting that he, too, found the President’s response somewhat bizarre. But Levin insisted that this was more than a narcissistic tick; this was a possible opening into even darker and more corrupt secrets hiding within Rep. Weiner’s Twitter account than were initially anticipated. Could Levin possibly be sparking a neo-birtherism to prove that President Obama is actually this naked white person in what appears to be the Congressional gym– the same Congressional gym, one might add, where another naked white Democrat– Rahm Emanuel— was rumored to terrorize known tickle fiend Eric Massa? To quote the man himself, who the hell knows?