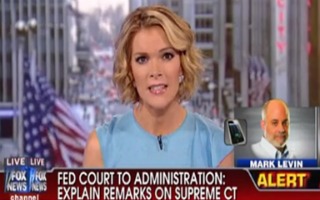 On Wednesday, radio host Mark Levin appeared on Fox News Channel’s America Live with Megyn Kelly to discuss President Obama’s comments on Monday about the Supreme Court warning against judicial activism while the court considers the constitutionality of the Affordable Care Act.

“I want to start with the unusualness of the President of the United States commenting on pending litigation in the way that he has both on Monday and on Tuesday,” said Kelly. “Your thoughts on why he’s doing that?”

“He’s commenting on a case where he knows full well that the justices are currently in the process of giving their own opinions to each other in their cloistered environment,” said Levin. “It’s one thing for a president to criticize the Court and its decision as activist, and so forth, once he’s read their decision. There is no decision to read.”

“What this president is trying to do is get to these judges, particularly [Anthony] Kennedy, and let them know, ‘look, I’m going to unleash a war on you guys,’” Levin continued. “If you don’t rule the way that I like, this is just a taste of what you’re going to get.”

Kelly cited a recent Rasmussen Reports opinion poll that showed 72 percent of respondents believe that the Court’s opinions are usually fair, good or excellent (while only 28 percent rated the Court as “good” or “excellent” in that survey). “Is there risk in having the President of the United States criticize these nine justices in the way that he did on Monday?”

Kelly asked Levin if he believed, as he suggested that Obama’s warning was aimed at Kennedy, if it could have any effect on his opinion. “It ought to have the opposite effect,” said Levin. “This is an attack on the sanctity of a branch of government.”