Martin Bashir: ‘If There Isn’t A War On Women, Most of Us Must Be Ignorant’
video

Martin Bashir: ‘If There Isn’t A War On Women, Most of Us Must Be Ignorant’ 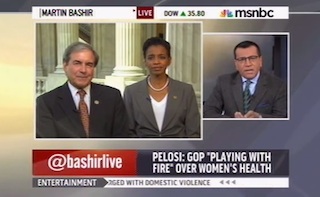 The big fight in Congress recently has been over a proposed student loan bill that passed in the House today despite a veto from the White House and almost certain defeat in the Senate. The Republican backed bill manages to make sure that interest rates on federal student loans don’t double in coming months. They did this by going into the new health care law, finding some women’s health funds that were sass-talking too much, and slapping them in the face. Metaphorically speaking that is. Unsurprisingly, Democrats have seized on that, arguing that Republicans would rather cut money for women than raise, say, raise payroll taxes for corporations and those with high incomes (which a competing Democratic bill in the Senate is proposing). These Democrats found a sympathetic ear in Martin Bashir who agreed with this thinking on MSNBC today.

Bashir was joined by Democratic Congressional Reps. Donna Edwards of Maryland and John Yarmuth of Kentucky and he lofted up lay ups for them to attack Speaker John Boehner’s claims that it was “silly” to make this about a fight on women. They jumped right at it with Edwards accusing Republicans of making American women decide whether to go to school of have health care.

Everyone was in such agreement that Bashir couldn’t fathom why the Republicans would engage in such “perilous politics” or how anyone couldn’t see it as such.

“Why then do they all deny that there is a war on women when they would rather deny women access to important health care provisions but keep subsidies for their friends in the oil industry? I mean, if there isn’t a war on women, most of us must be ignorant then because it seems that way.”

As the phrase “war on women” has quickly become a political swear word to some, feel free to debate it heartily after watching the clip from MSNBC below: