Martin Bashir And Michael Steele Battle Over Whether Romney, Obama Are Treated Equally On Religion
Video

Martin Bashir And Michael Steele Battle Over Whether Romney, Obama Are Treated Equally On Religion 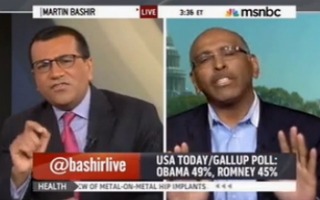 Ball discussed how GOP presidential hopeful Rick Santorum is now in the “death throes” of his campaign, and Ealons noted that it was Steele who “changed the rules for Republicans,” giving us this long primary — a primary which is now entering its “zombie phase,” as he characterized it.

“The only thing we did was extend the time you got to play,” said Steele. “And how you play the game has nothing to do with the time on the clock.” When he added that Newt Gingrich needed more than a win in Georgia to gather the type of momentum needed to move him forward in the race, Bashir interrupted to note that “Newt’s enjoyed selling children’s books about an elephant.”

Turning the talk to religion, Bashir then asked Ball “how it is that people are allowed to impugn the President’s religion, but when Mitt Romney faces a polite question on the contents of his faith, he refuses to answer?”

Bashir then turned to Steele, saying that “no one’s allowed to question Mitt Romney on the contents of his beliefs, and yet the President must be subjected to endless silence when his own personal faith is smeared and slurred.” Steele noted that a double standard does exist, and it does back to then-candidate Barack Obama not answering questions about his relationship to the Rev. Jeremiah Wright. Bashir would have none of it.

“Excuse me, excuse me,” Steele called out. “You’re having a discussion is asking questions, right? But a candidate needs to respond, and there was no response from the other side. So Mitt Romney is taking the same playbook…”

Bashir continued to speak over Steele, and the two men simply could not agree on whether or not Romney and Obama are 1) being treated equally when it comes to questions about their respective faiths and 2) whether they are handling these questions in the same manner.

Watch what happened, via MSNBC: