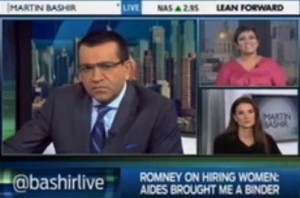 The cable news media continues to mine the Greatest Presidential Debate Evar for its embarrassment of riches. On Wednesday afternoon, Martin Bashir Live host Martin Bashir drew insights from panelists Crystal Ball and Goldie Taylor on Republican nominee Mitt Romney‘s decision to link single parents with gun violence, in response to a question about assault weapons. Crystal and Goldie (now there’s a name for a show) pointed out that Romney’s correlation ignores the causation of poverty, which Romney and running mate Paul Ryan figure to make worse, not better.

It was a strange answer Romney gave, in a portion of the debate during which I must have tuned out while writing something for the site. In response to a question about limiting the availability of assault weapons, Romney veered off into strange ground. “We need moms and dads, helping to raise kids. Wherever possible the — the benefit of having two parents in the home, and that’s not always possible. A lot of great single moms, single dads. But gosh to tell our kids that before they have babies, they ought to think about getting married to someone, that’s a great idea.”

“So, Crystal,” Bashir asked, “the answer to violent crime is not legislation, or laws to prevent these super large weapons from falling into the wrong people’s hands, but it’s fewer single-parent families?”

“It was a very strange connection to make,” Ball replied, adding “It’s true that a lot of times single mothers get trapped into a cycle of poverty. That part is true. But what is Governor Romney proposing? He’s certainly not proposing allowing those women to take control of their lives and have family planning services. He’s certainly not advocating for any safety net to help support them while making ends meet for their family. I mean, the whole thing is just a strange situation where he’s trying to cover for the fact he used to support an assault weapons ban when he was in Massachusetts. Now, because of where his party is and where he thinks he should be politically, he can’t say that anymore.”

Romney’s attempt to distance himself from that assault weapons ban was even weirder. He said the law he signed was “referred to as an assault weapon ban,” but isn’t really one because some pro-gun people signed it?

She then zeroed in on the bullseye. “I will tell you this, the number one predictor for the presence of illegal guns, the number one predictor for the presence of violence in communities, it is persistent poverty,” Goldie said. “It is not whether or not one or two parents or at home, or a traditional marriage or nontraditional. It is poverty. When you look at Mitt Romney’s policies, or Paul Ryan’s budgets, when you want to kick 200,000 kid off the free lunch program…those are the things that are pushing gun violence in this country.”

All very true, and the kinds of financial hardships Goldie describes also make it tough for couples to stay together. The conservative notion that if you just stick a man and a woman together with Krazy Glue, everything will be okay is just bass-ackwards. If things are good, it’s much easier for families to stay together.

The thing that surprised me, though, was the phrasing of Romney’s two-parent rant, because he didn’t specify a mom and a dad, he said “moms and dads,” and he said we should tell our kids to get “married to someone.”

Did Mitt Romney just come out for gay marriage a little bit?

In fairness to Romney, though, President Obama also largely (but not completely) skirted the question, and used it to go off on a tangent about hiring more teachers. He did give at least a few seconds of relevant response, seeming to acknowledge the lack of political will around gun control by saying, “what I’m trying to do is to get a broader conversation about how do we reduce the violence generally. Part of it is seeing if we can get an assault weapons ban reintroduced.”