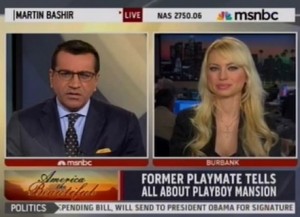 MSNBC’s newest anchor, Martin Bashir, devoted several minutes of his show (and an unknown amount of energy) keeping a straight face while reporting on an infectious disease outbreak that emanated from the world famous Playboy Mansion.

It is, perhaps, a sign of the times that the onetime mothership of hedonism and debauchery is suspected of causing an outbreak, not of some exotic malady of the penis, or of peculiar muscle strains, but of Legionnaires’ Disease. This is the sad tale of a dusty, ancient relic of a bygone America, and his mansion.

If you’re anything like me, you’re probably wondering, “what exactly is Legionnaires’ Disease?”

According to LA County public health officials, the legionella bacterium is “commonly found in moist environments,” which rules out Hugh Hefner himself as the source.

Bashir wisely employs the tactic of playing an inherently funny story straight, calling in noted non-epidemiologist and former Hefner girlfriend Izabella St. James, and deadpanning such questions as “While you were there, were you aware of possible sources of contamination?” and “Dog urine isn’t exactly an aphrodisiac, is it?”

Oh, how the mighty have fallen. The former world headquarters for orgiastic indulgence is now a urine-reeking hotbed of airborne contagion, and former Nightline anchor Martin Bashir gets to report on it.