Martin Bashir Asks Goldie Taylor: ‘Is Herman Cain A Clown Or A Candidate?’ 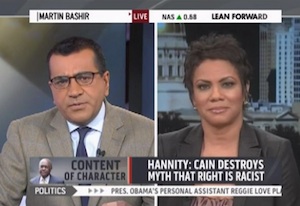 Martin Bashir spoke with TheGrio‘s Goldie Taylor on his MSNBC show Thursday about Herman Cain and the controversy over his calling Nancy Pelosi “Princess Nancy” and bluntly asked her if the Republican candidate “was a clown or a candidate?”

“I don’t think he is a clown,” Taylor replied. “But he’s an author on a book tour. He has a number of talking points that his handlers are giving to him and he is staying to script. It’s awfully odd when he’s asked a question outside the script, he doesn’t know where to go. Asked a question about China, clearly he wasn’t equipped and doesn’t know that China has nuclear capability, then he is off script. That’s the unfortunate thing about Herman Cain, he doesn’t operate without cue cards.”

Earlier in the segment, Taylor slammed the former Godfather’s Pizza CEO’s namecalling over Pelosi, calling it “some of the most misogynistic stuff I have ever heard during a presidential debate and it’s beneath even Herman Cain to stoop that low.”

“And when you recall what Herman Cain in referring to Secretary of State Hillary Clinton and negotiating with (Libya) and he said something like ‘bless her’ in that condescending manner, it seems to me that Herman Cain has some kind of difficulty with women holding high office in this country,” Bashir exclaimed.

Taylor said she didn’t know him well enough to make those claims but that if she was in Cain’s shoes she would make a public apology to Speaker Pelosi. She also criticized Cain’s earlier gaffes.

“We are not holding him to the same standard as we hold any other candidate in the race. And truthfully, it’s because he is African-American and it gives the right-wing a way to say look-er-here. ‘We are not racist. We really like Herman Cain.’ And that’s the most unfortunate part about all of this.”

Watch Bashir and Taylor slam Herman Cain below via MSNBC: