Martin Bashir: By Talking About It, Sarah Palin Was ‘Bragging’ About Secret Service ‘Checking Her Out’
video

Martin Bashir: By Talking About It, Sarah Palin Was ‘Bragging’ About Secret Service ‘Checking Her Out’ 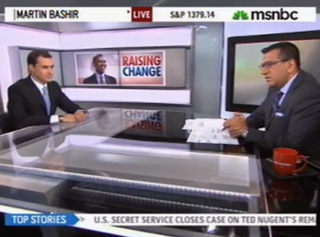 Martin Bashir spent some time talking to Obama 2012 Press Secretary Ben Labolt yesterday, attempting to highlight the absurdity of how conservatives have embraced the fact that, as a child, President Obama ate dog meat. Except Bashir inadvertently ended up sideswiping Sarah Palin in a story in which she had no fault, and claiming that her assertive retort at being “checked out” in 2008 by a Secret Service worker constituted “bragging.”

RELATED: Sarah Palin Reacts To News That Secret Service Agent In Scandal Was On Her ’08 Security Detail

Bashir began a question to Labolt noting the comments about President Obama and dog eating, and took a sharp turn when playing a clip of Palin saying she hoped Secret Service Agent David Chaney was “put in the doghouse” for being so degrading to her. “Sarah Palin’s comment in relation to the Secret Service issue where she also bragged about being checked out… what’s this about?” Bashir asked. Labolt replied only to the question on dogs, asking “when the Republicans are next going to surface an attack on a 6-10 year old.”

It was a short, possibly throwaway, but potentially dangerous comment to make about a victim of sexism in the workplace. Dangerous because Bashir commands an audience by virtue of a perch in national media, one from which he has effectively whitewashed completely disrespectful and inappropriate behavior as something to “brag about.” No rational person considers being objectified while on the job– particularly as serious a job as campaign for second in command of the free world– something to “brag” about. Being open about the experience of being thoroughly disrespected as person in general and woman in particular is not bragging, and to use such language to describe what Palin is doing here is to shift the burden of responsibility upon her. It is a more subtle and, perhaps because of this, more acceptable version of the “she asked for it” argument. Surely, Bashir implies, publicly overcoming the sort of institutional sexism that makes people like Chaney believe his open salivating constitutes professional behavior means that said open salivating could not have been “that bad.” Surely, Bashir implies, this is nothing to make hay over. The message being sent to female politicians– and, worse, girls who might aspire to being politicians– is that they must accept this objectification with their mouths shut, lest they be accused of “bragging.”

The problem with Bashir’s comment is not a partisan one– in fact, it highlights precisely what many, particularly conservative, women consistently argue about the gender problem in the media: it cuts both ways. Bashir is an ideological liberal, and has aligned himself on what he considers the “right” side of the War on Women, the one that wants to protect their rights. The side that respects women while conservatives try to control their lives. He likely saw no conflict between this position and his designation of objectification as an experience that proffers bragging rights, as so many on both sides of the aisle have only a one-dimensional appreciation of sexism. On one side, sexism is only the denial of certain reproductive rights or entitlements. On the other, sexism is calling a female politician “shrill” or “stupid,” or making offensive comments. Somehow, few seem to notice that these things go hand-in-hand, and fighting only one does little to advance the cause of gender equality.

One can argue, and many liberals do, that Palin has done the feminist movement harm– either because of her stance on abortion or any other ideological belief she holds. No one can reasonably argue that setting an example by openly discussing sexism in the workplace does women anything but good. For this, Palin should be commended, not labeled a braggart, and someone who spends as much time chastising others for their treatment of women should know better.

The comments via MSNBC below: