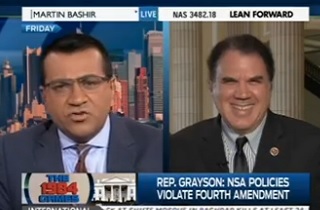 The hype surrounding the recent revelations about National Security Agency data collection has become so overblown that even Flavor Flav is starting to believe it, but thankfully, there are still voices of reason in what’s left of our shattered republic. Case in point: MSNBC’s Martin Bashir, who scolded Congressman with Guts™ Alan Grayson (D-FL) over his comparison of our country, on the floor of the U.S. House of Representatives, to places like North Korea and Nazi Germany. At least he didn’t compare us to Dick Cheney.

Grayson turned his penchant for yelling and wordplay against the NSA in a speech last Friday, derisively dubbing the agency’s data collection programs “as American as apple spy,” and declaring that “We are not North Koreans. We don’t live in Nazi Germany.”

Referencing the gun lobby’s sick talking point about gun control and the Holocaust, Bashir asked Grayson, “Aren’t you being as counter-factual as the NRA when you invoke North Korea and Nazi Germany, in that the NRA says a bill which prohibits a gun registry is actually an echo of hitler? And, of course, you’ve mentioned the Nazis in connection with the NSA.”

Instead of answering, Grayson asked a question of his own. “Martin, let me ask you, how do you feel about the fact that the government is keeping a record of every single phone call you make?” he said. “Are you happy or unhappy with that?”

Yes, because being unhappy about something is just like the Holocaust.

“If you wouldn’t mind, sir, I’m merely here to ask you certain questions,” Bashir pressed. “Our viewers have no interest in my view. They’re interested in your view as he an elected member of congress and responsible member of congress. Do you think you were were being as counter factual as the NRA by invoking Hitler and North Korea?”

“Martin, you are completely missing the point,” Grayson replied. “The point is we’re taking measures not correlated in any sense with our safety. Even if they were, it would be beneath our dignity as human beings. That’s what this is all about.”

He’s right about that. I’ve heard the exact same argument, especially the speed limit one, used by gun nuts to argue that we don’t need any gun laws. It’s hard to say which is dumber, comparing a list of phone calls (without names) to Nazi Germany, or using gun nut talking points to argue your liberal position. I know which is more offensive.

There s a reasonable conversation to be had about NSA surveillance, one that is 35 years late and counting, but it doesn’t include Nazis, 10 mile-an-hour speed limits, or naked Alan Graysons on a plane. Although that sounds like a killer Samuel L. Jackson movie.

Here’s the clip, from MSNBC, preceded by Grayson’s Nazi comments: