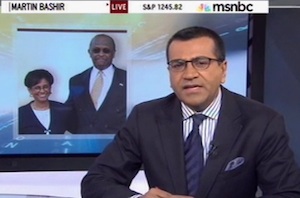 As speculation about scandal-besieged Republican candidate Herman Cain‘s political future continues to abound, MSNBC host Martin Bashir called upon the former Godfather Pizza CEO to resign from his church over his alleged 13-year affair with Ginger White. “If Mr. Cain is to drop out of the Republican race, isn’t it time he also considered resigning his position as an associate minister at Antioch Baptist Church in Atlanta?” Bashir asked. “If Mr. Cain withdraws from politics, then he must surely resign his position in the church, because one thing is for certain– hypocrites can lie in the pew, but they should never lead from the pulpit.”

“We contacted the church just an hour ago,” Bashir disclosed. “But they refused to deny or confirm Mr. Cain’s role. In fact, they wouldn’t say a single role about the Republican candidate but if Herman Cain proves to be lying and drops out of the race, doesn’t that also disqualify him from holding a position in the local church? Mr. Cain’s church is part of the National Baptist Convention of the US, founded in 1880, the second largest in the entire Baptist union, with almost 8 million members nationwide. In their statement of faith, they say this, “Nothing prevents the salvation of the greatest sinner on earth, but his own determined depravity and voluntary rejection of the gospel.”

Watch Bashir’s call for Cain to resign from his church below via MSNBC: