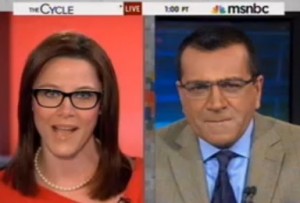 At the tail end of Tuesday’s The Cycle on MSNBC, conservative co-host S.E. Cupp delivered a bit of commentary that was critical of the term “assault weapons,” laws banning assault weapons, and of attempts to ban high-capacity ammunition magazines, which she likened to the 7-Eleven “Big Gulp” beverage. During the live “toss” from The Cycle to Martin Bashir Live, host Martin Bashir tested S.E.’s Big Gulp logic, asking her “How many rounds did Jared Loughner fire off before he was tackled?”

The gist of Cupp’s commentary had to do with all-powerful gun control advocates Jedi mind-tricking unsuspecting Americans into confusing semiautomatic weapons with machine guns, and the term “assault weapons” having too many meanings (hopefully, very soon, there will just be one), and with how flash suppressors (what you would call “silencers”) are “largely cosmetic,” all while asserting that the words “assault weapon” are “irresponsible.” (I may be condensing or paraphrasing here.)

In reality, the “largely cosmetic features” that help to define assault weapons include such shiny trinkets as grenade launchers, and the legal designation “assault weapons” falls within a very narrow range of definitions that depend, largely, on how successful gun nuts are at diluting such laws. The Brady Campaign scores assault weapons bans in two basic categories, the “1 feature test” and “2 feature test,” and the subcategory “2 feature test on assault pistols only.”

“Strict” Connecticut uses the more lax “2 feature test,” while only New Jersey and California use a “1 feature test,”  which means no grenade launcher. Sorry. Beyond the legal differences, though, there is a generally understood definition of assault weapons as semiautomatic firearms with certain similarities to military firearms. The specificity that people like S.E. Cupp demand is exactly how gun manufacturers get around assault weapons bans, by barely skirting the goalposts once they’ve been established. The alternative is banning many more weapons than would ever be allowed by pro-gun advocates. This fainting and fanning over “too many definitions” is lawmakers’ “reward” for trying to ban less guns.

Finally, whether you currently “hunt” with an assault weapon (why not? Who among us hasn’t “fished” with a stick of dynamite?) or not, nobody is, in fact, taking away your guns, because the assault weapons ban under consideration has a grandfather clause.

S.E. also said that high-capacity magazines are like Big Gulps because “shooters can get around magazine restrictions by buying more magazines.”

That bit of logic was, apparently, too much for Martin Bashir, who asked S.E., during the live toss to his show, “Just a quick question. How many rounds did Jared Loughner fire off before he was tackled?”

“What’s your point?” she replied.

“How many rounds had he fired off?” Bashir repeated.

“31.” Martin answered. Loughner used a 30-round extended magazine, plus one in the chamber. “He was actually tackled because he was reloading,” Bashir added.

“We should be trying to stop crazy people and criminals, Martin, from shooting one person,” an agitated S.E. shot back, “not ten-plus-one person, which all that is accomplished when you ban high capacity magazines. That’s all that’s accomplished.”

I’m no mathematician, but by my count, that’s ten-plus-twenty-one.

Here’s the clip, from MSNBC’s The Cycle and Martin Bashir Live: