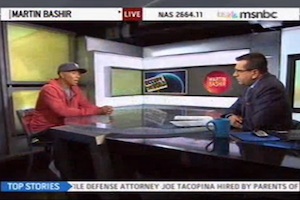 On MSNBC this afternoon, Martin Bashir spoke with hip hop mogul Russell Simmons about the Occupy Wall Street movement and challenged the Def Jam co-founder over whether there were vocal anti-Semitic sentiments permeating the protest. “There’s been some reporting that anti-Semitism has begun to emerge and…” Bashir began. Simmons incredulously interrupted, “Can you repeat that?!”

“Can you repeat that?” asked a mystified Simmons. “Where’d you get that from — Bill O’Reilly or somebody?”

“No, let me show you,” Bashir said. “A group called the Emergency Committee For Israel has released this advert, watch this.”

Bashir played the group’s political ad which juxtaposed footage of President Obama and Nancy Pelosi making supportive statements of the protest with a compilation of anti-Semitic incidents that occurred in Zuccotti Park: “Jews are pro-Wall Street!” shouts one. “You’re a bum Jew.” Another sneers, “The small ethnic Jewish population in this country, they have a firm grip on America’s media.”

“Have you seen any of that?” Bashir asked pointedly.

“I go down there every day and I see sweet, compassionate and astute people. I see the people who have high aspirations for America who are idealistic…I see the most inclusive group America has to offer.”

Simmons added that the news media often takes isolated incidents and makes them representative of the entire protest.

“I just have to press you on this, because this Emergency Committee would not have put a video like that together and posted it if there weren’t sufficient images, and that seemed like multiple cases of people being deeply offensive,” Bashir pressed.

Simmons said there’s been many protests worldwide and that the more politicized the protests became, the more inevitable it is that there would be a promotion of atypically negative aspects by opponents. “It’s really easy to find one or two images and use them. We all know that whoever’s visited all know that it’s very sweet. It’s a politically astute, compassionate and loving group.”

“And there’s no focus on Jewish bankers, Jewish financiers? There’s nothing of that kind?” Bashir again questioned.

“I have not seen any of it, but if there is some, there are a lot of things down there but mostly it’s a will for America to be better…If some people don’t like the fact that they are attacking Wall Street and they want to frame it poorly, they can. You as a responsible journalist have to go down for yourself and you have to make an assessment.

“I have been down there, and I didn’t see any of those signs,” said Bashir. “I appreciate that,” Simmons responded.

As the Occupy Wall Street protests continue to grow into a worldwide movement, there will be continued efforts to discredit it. Bashir’s surprisingly intense grilling of Simmons over the anti-Semitism of a few protestors will give some observers the idea that there’s legitimacy to the concerns, despite Simmons’ defense that they are isolated.