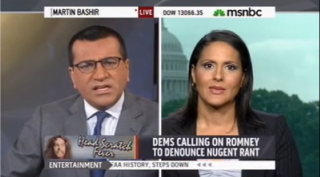 Today, while the conservative media is desperately hoping that, through some kind of Air Bud-esque miracle, we learn that there’s no rule against dogs voting in elections, the liberal media is desperately clinging to a mad dog of their own; Ted Nugent. Nugent has found his way back in the news after saying he’d find himself “in jail” next year if President Obama was re-elected, comments that have forced investigation by what we can only assume is a very bored Secret Service agent (but one whom must be thrilled he wasn’t stationed in Columbia instead). On MSNBC, Martin Bashir discussed some of Nugent’s more offensive comments. Or, at least, spelled them out.

Yes, when it came to the part where Nugent called Hillary Clinton a “toxic cunt,” Bashir would only refer to the word as “the term spelled C-U-N-T,” a bit of caution that jarred with his outraged tone.

Anyway, it was an amusing moment. Lucky that I caught it since I usually only cover Bashir on Tuesdays. Anyway, now that he’s done, let me just say, “Martin, I’ll see you next Tuesday!”