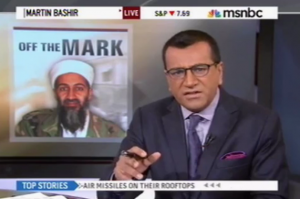 With the one-year anniversary of the killing of Osama bin Laden — and President Obama‘s new ad that highlights the mission — comes a decent helping of political controversy. Many, including Arianna Huffington (who called it “despicable”), have criticized Obama’s bin Laden ad. But on Monday, MSNBC’s Martin Bashir posed a question: If President George W. Bush could use “Mission Accomplished,” why can’t Obama bring up the bin Laden raid when he’s seeking re-election?

Political analyst Richard Wolffe brought up a similar sentiment. “Puh-lease” he said, bringing up Bush’s now-infamous “Mission Accomplished” incident. It’s not just giving the order, Wolffe added, but “whether you have a policy and a strategy in place to do so.”

Ron Christie, former special assistant to Bush, said he applauded Obama’s decision, but what he took issue with was Obama’s questioning Mitt Romney’s patriotism, implying that he wouldn’t have given the order. “I think any president, regardless of the party affiliation, would have given that order,” he said.

Noting the backlash to the president, Bashir added:

They’re saying that he is spiking the ball, he is celebrating. One of the things we’re having problems with: why is it acceptable for Bush to celebrate “mission accomplished” in preparation for his re-election, but it is not appropriate for the president to even mention the killing and capturing of bin Laden?

Christie accepted that point, but pointed out that he thought “Mission Accomplished” was a mistake, and that we’ve heard Bush also say it was a mistake. This anniversary, he said, is an opportunity for Obama to unify the country.

Agreeing with Bashir, contributor Jonathan Capehart said, “The president is within his right and his administration is within its right to talk about the fact that the world’s most wanted man was captured and killed on his watch by an order that he gave.” But, he further echoed agreement with Christie, taking issue with the president questioning Romney.

“I think any person sitting in that chair in the Oval Office, when given the same information, no matter what they’ve said in the past, would have made the same decision,” he said.