Martin Bashir Talks To Mediaite About MSNBC, Anonymous Threats, And How He ‘Silenced Everybody’ 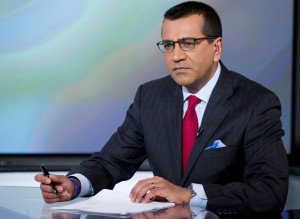 MSNBC’s Martin Bashir loves a challenge. Describing himself as a novice in the world of five-day-a-week cable television (he arrived at MSNBC from ABC News, where he was a co-anchor at Nightline), the British-born Bashir knows his show is still “a work in progress.” Comparing his work as host of Martin Bashir to that of the network’s primetime stars, like Rachel Maddow and Lawrence O’Donnell, Bashir’s quick to concede he’s still learning. “It’s a challenge to find a voice, but also to do it in a way that consistent to me,” he told Mediaite. “I’m really more of a listener than a shrieker.”

He may be known as a genteel listener, but that’s not to say he’s a pushover when temperatures get hot. When Bashir delivered a commentary on Sarah Palin’s on-again, off-again bus tour, suggesting the motive behind it all was money, Palin’s supporters unleashed a torrent of criticism–and a few lightly veiled threats. “It was extraordinary. I had people literally leaving messages (late at night),” he told us, describing some of calls as unsettling in their tone and content. “Extremely offensive language and saying things about me personally. They said they knew where my family lived.”

Bashir, in keeping with his character, pondered the passion behind the threats before deciding what to do. “I’m an outsider, but I can tell you it’s a privilege to work in this country. So much of America is special and exceptional. And the implication of people who were (calling) was that because I was criticizing a quasi-politician, I was criticizing the country…that I was in some way implying comtempt or disrespect for this nation.”

Bashir made the decision to respond by going on his program and showing viewers his green card. “I am, in fact, a legal, permanent resident of the United States,” he said, holding the green card in his hand. “And I’m well on my way to becoming a citizen of this great country.”

It was a unique moment and a revealing one. It also put an end to the phone calls. “It was something. To be perfectly honest, it silenced everybody.” And for Bashir, it was not a moment manufactured for television–but a response that came from his heart. “I’m not someone who hates this country. I’ve grown to love this nation.”

With a passion that rivals his support of English football team Chelsea, Bashir speaks with great intensity about why he has chosen to pursue American citizenship. “History…religion…entrepreneurialism. A nation of immense charitable giving.” Living here–and being a part of the political debate, with a vote? “I consider it a privilege.”