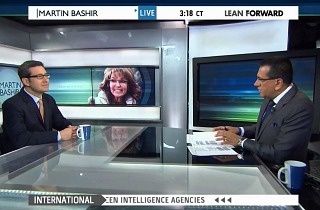 Over the weekend, former Alaska Gov. Sarah Palin knowingly irked her detractors on the left when she equated America’s national debt and the impact it will have on future generations to slavery. “This isn’t racist,” she added before making her comments, knowing that her political opponents in the press would attempt to frame them in that light. On Monday, MSNBC host Martin Bashir took the bait.

In a segment with Ring of Fire radio host Sam Seder, Bashir tried twice to get his guest to indicate that Palin was attempting to speak to a cast of closeted bigots in the right wing ether. While Seder did issue a scathing critique of Palin and her brand of political commentary, he refused to humor Bashir’s efforts to say Palin was pandering to racism.

“Mrs. Palin’s delusional dominionism is nothing new,” Bashir began. “But, in Iowa this weekend, she, well, she compared our national debt to slavery.”

“Who is that destined for, that kind of remark?” he asked.

“It’s obviously for an ever-increasingly smaller group of people who she is trying to sell to,” Seder replied. “She is running out of things to say.”

On a factual basis, Seder said that Palin was almost entirely incorrect about the effects of foreign countries holding American debt.

“But what about the slavery part?” Bashir probed.