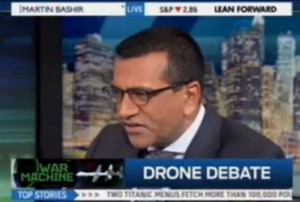 In a cable news landscape that runs on a fuel cocktail of partisan vitriol, routine fabrication, and misinformation that actually harms people, MSNBC’s clearly-labeled opinion host Martin Bashir has suddenly been singled out as a “nightmare,” both moral and otherwise, for sins including, but not limited to, a segment on the U.S. drone program, and for being mean to Republicans. Whether there’s anything to support that “nightmare” designation or not (I say not), the Martin Bashir program is doing something right: delivering eyeballs.

Esquire political writer Charles Pierce kicked off Bashir-Bash 2012 with a critique of one segment of the show that he deemed a “moral nightmare,” a segment which dealt with President Obama’s use of Predator drones, and the civilian casualties that result. Pierce’s main problem was with guests Col. Jack Jacobs (Ret.) and Michael O’Hanlon, and on the merits of his arguments, I’m inclined to agree. The idea that “the vast majority of” the 2,500 people killed in drone attacks were terrorists is absurd, and O’Hanlon’s brusque invocation of “just war” and his assessment of the drone program’s difference from other weapons were perfunctory and ice-cold.

But how Martin Bashir becomes the villain here, as he did for Glenn Greenwald and our own Andrew Kirell, is unclear to me, since the very premise of Bashir’s segment, the premise that Martin Bashir established at the top of the segment, was that the drone program doesn’t match up with President Obama‘s civil liberties rhetoric as a candidate. That sounds familiar to me. Martin Bashir asked the right questions, it seems to me, and the angst is over the answers, or maybe over the fact that Martin Bashir couldn’t solve the moral dilemmas of war in a five-minute cable news segment (even Doug E. Fresh needed six):

My problem with Pierce’s piece, though, is his selection bias. Calling this segment a “moral nightmare” is like a guy who has been buried up to his neck in sh*t for 30 years suddenly exclaiming, for the first time, “Hey, I’m buried up to my neck in sh*t!”

If the problem is that the military, the media, and most of the American people, don’t give a rat’s ass about civilian casualties who don’t look like us, Pierce is a few hundred years late to the party. If a five-minute segment on afternoon basic cable is a “moral nightmare,” then Pierce must’ve been a really sound sleeper until now.

My colleague, Andrew Kirell, then used Pierce’s critique as the jump-off for an all-out evisceration of Martin’s program, which included the notion that “Bashir is just outright nasty and personal,” a legitimate opinion only slightly undercut by this passage in Pierce’s Kirell-approved diatribe:

And, it should be noted for the eternal record that I think yesterday’s Hardball was a Beltway circle-jerk of sufficient enthusiasm that it’s a wonder that Matthews and any of his guests have an intact rotator cuff left.

Or as I like to call it, a completely accurate reflection of reality. Andrew calls Bashir “intellectually dishonest,” but unlike many cable news programs, Martin’s show is clearly labeled, and his point of view isn’t just worn on his sleeve, it is his sleeve, nay, his entire shirt, and his necktie, too.

Conservatives may not like it (although at least some of them watch anyway), but a whole lot of other people do. In November, a month which saw the election boost ratings for all of the network’s programs, Martin Bashir posted their best demo and total viewer ratings ever, and the best total viewer figure in the history of MSNBC’s 4 pm timeslot. From MSNBC’s press release:

It’s true that Martin Bashir’s brand of drolly-delivered, sometimes outrageous putdown humor isn’t for everyone, but it is apparently for enough people that the MSNBC brass can sleep like a baby.