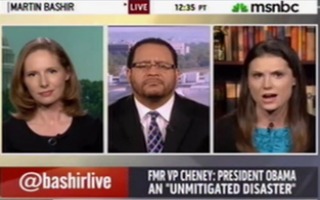 Martin Bashir tackled former Vice President Dick Cheney’s comments over the weekend in which he said that Barack Obama is an “unmitigated disaster” for the country. He and his panelists proceeded to wring their hands furiously over Cheney’s certainly hyperbolic and politically motivated statement (delivered, notably, at a political convention). The MSNBC panel then attempted to convince themselves that the facts suggest that the president is not only not a disaster, but heading towards a fairly strong reelection victory. Those “facts” in question speak for themselves, and they tell quite a different story than the “fiction” advanced by Mr. Bashir’s panel.

RELATED: Dick Cheney: Obama ‘An Unmitigated Disaster To The Country’

“Is Mr. Cheney accidently referring to himself,” Bashir asked rhetorically of his panel guest, Georgetown University Professor Michael Eric Dyson. Dyson suggested, without any evidence that he understood the inherent irony in his statement, that Cheney is a person who doesn’t understand that you can disagree with someone without demonizing them (as Dyson does regularly, calling Obama’s opponents obsessed with making him out to be “the other”). He went on to excuse the failings, economic and otherwise, of President Obama’s tenure because they were brought on by the Bush/Cheney administration.

Bashir then turned to Republican strategist Julianne Glover who, as the token conservative, attempted to legitimize Cheney’s inflammatory comments and suggest that he remains a potent force within the party. She is correct in her analysis – that many Republicans still hold Mr. Cheney in high regards – but her delivery left something to be desired.

When the conversation turned towards President Obama’s reelection prospects, the last week’s news, which has been particularly and objectively bad for the president, seems to have set off alarm bells in the minds of the panel’s Obama supporters. The prospect that President Obama could really lose the election to Mitt Romney – a candidate that has been dismissed in progressive media for months the best of the GOP’s “B team” – has never warranted serious consideration. Now that it does, Obama’s supporters like Bashir attempt to reason the facts leading to that conclusion away.

“The economy has gotten worse under Obama,” she replied.

“25 straight months of private sector job growth, and I just find it shocking that you’re willing to repeat Romney’s line that he’s been called out on time and time again that the economy has gotten worse under this president. I mean, that’s just crazy,” interjected MSNBC political analyst Krystal Ball. “Hatred of the president may have been enough to get Romney through a GOP primary, he’s going to have to offer something other than that in order to win in a general election.”

“The trends suggest, historically, the data suggests that a president who is creeping up incrementally… has a great chance of being reelected,” said Dyson. “They are totally recalcitrant and resistant to the notion of dealing with the facts. What are you talking about? If you’re just going to put blather forward that ideologically driven that has no benefit for either Republicans or the Democrats it seems to me. So, let’s argue facts not fiction.