Martin London’s Letter To Madoff: Every Time You Eat, ‘I Want You To See Your Son’s Corpse Hanging Over Your Table’ 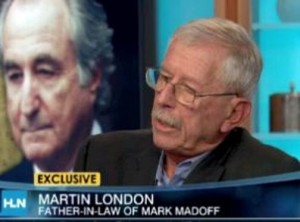 London’s letter, which he admits to have written while he was “furious,” reveals the depths of his sadness and anger over the loss of his daughter’s husband and of Madoff’s role in his son’s demise:

While I will not send to you pictures of your grandchildren, there was one picture I do want you to see — the last picture of your son, Mark. You owe it to his widow, his children, his brother, his mother to try your best to see it in color and in 3D, to see what I saw when I walked into that apartment at seven thirty a.m. in the morning.

So. Here is what I wish for you, Bernie: First, I wish you a long life in prison. Second, here’s the plan, Bernie. Every time you sit down to eat, as you pick up your plastic fork, I want you to see your son’s corpse hanging from the rafter directly over your table. Right in front of you, Bernie, so at every meal, when you pick up that utensil, as you hold it in your hand ready to eat your prison meal, you see your son Mark. His white sweat socks are swaying ever so gently at your eye level, immediately above your food dish. And as you look up, Bernie, you see your firstborn son hanging there, his head at a left-leaning angle, looking down at you, asking “How could you do that to your son, who, up until two years before his death, had given you the greatest gift — his unconditional love for his father.”