Martin Short On Romney: The GOP ‘Seems To Fear Gays’ But ‘Have Fallen Head-Over-Heels For Big Stiff One’ 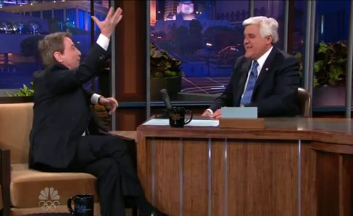 On Monday evening’s edition of NBC’s Tonight Show with Jay Leno, comedian Martin Short gave his take on Mitt Romney and his former opponents for the Republican presidential nomination. Short said of the GOP that “it’s fascinating, though, for a party that seems to fear gays as much as they do, that now the Republicans have fallen head-over-heels for a big stiff one.”

Leno began by asking Short, a Canadian-American, about whether he follows American politics, despite there not being “kings and queens and all that nonsense.”

Short responded that “We have the queen, you have Marcus Bachmann,” referring to Michele Bachmann‘s husband. He continued on to say “2008 was the most exciting. The Democrats had, for the first time, a black man on top of the ticket. And the Republicans had a vice-presidential choice: a woman who had never met a black man.”

When the conversation turned to Romney’s presumptive nomination for the Republican party, Short said, “I’m sure he’s a very nice man. I’ve never met him. I find it fascinating, though, for a party that seems to fear gays as much as they do, that now the Republicans have fallen head-over-heels for a big stiff one.”

Leno then asked Short for his (somewhat late) take on the rest of the Republican candidates. “Well, there’s Newt [Gingrich],” Short said. “That guy is hilarious, isn’t he? He kept wanting Washington to tighten its belt. This is a guy who has not seen his belt since junior high school.”

Check out the clip below, via NBC: