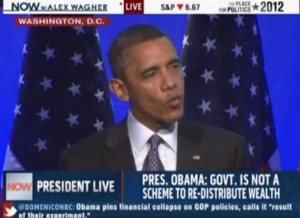 In a small but significant aside during his remarks at the Associated Press Luncheon today, President Obama cracked on former Massachusetts Governor Mitt Romney over his use of the word “marvelous” to describe the Paul Ryan budget. The quip drew laughter from the crowd, and seemed designed to underscore Romney’s famous purported stiffness, but was there something deeper at play here? Is President Obama trying to draw on the old stand-up comedy trope of the stiff white guy?

The President was discussing the new and improved Paul Ryan Budget 2: Electric Boogaloo, and took aim at the likely Republican nominee for president. “One of my potential opponents, Governor Romney, has said that he hoped a similar version of this plan from last year would be introduced as a bill on day one of his presidency,” the President said. “He said that he’s ‘very supportive’ of this new budget, and he even called it ‘marvelous’– which is a word you don’t often hear when it comes to describing a budget.”

Ah, it’s funny because it’s true. I can’t remember ever hearing that word outside of a Billy Crystal bit, or sarcastically in a Dirty Harry movie.

Now, on the surface, this appears to just be a jab at Romney’s reputation as an owner’s box-dwelling, out of touch Monopoly guy who can’t connect with voters. But is it possible there’s more to it? Has the Obama campaign made a conscious decision to draw a contrast between stiff, uber-Caucasian Romney and their looser, more relatable candidate? Can we look forward to jokes about Romney’s lack of rhythm, or hyper-vigilant style of driving?

No, it hasn’t, but as much of a reach as this whole theory is, who wouldn’t absolutely love to hear the right wing try to make that case?