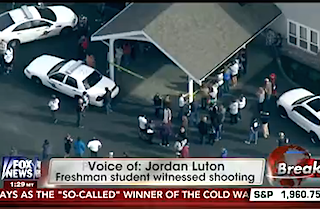 A Marysville-Pilchuck High School freshman named Jordan Luton, who witnessed today’s school shooting, called into Fox News on Friday afternoon to share details about the incident with anchor Shepard Smith. Luton said he was just two table away in the cafeteria when the shooter approached and fired six bullets.

Asked if the student fired indiscriminately or targeted specific students, Luton said he believed the shooter went up to a specific table in the cafeteria and began firing. “It looked like he was firing at people in particular, because he knows them,” Luton said.

“He played on the freshman football team with me,” Luton continued. “And I know that he was a pretty good kid all around until now, and would have never expected it from him.”

Later, Luton revealed that the shooter was part of the Tulalip Tribe, and suggested that perhaps he was responding to “racist” comments some other students had said about Native Americans in the previous weeks. He said one of the people he shot was a “good friend” who was in the same tribe.

Earlier in the day, Luton posted several messages to Twitter as the event was unfolding:

3 dead 6 shot shooter shot himself. Praying for everyone

Wow, I can't believe I just witnessed that