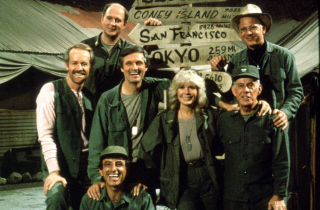 Jerry Seinfeld has never one to be political. Nor politically correct…

That’s why it was so damn refreshing to hear his response to a recent interview question regarding a lack of diversity on his web program, Comedians in Cars Getting Coffee:

“Oh, this really pisses me off…People think it’s the census or something. This has gotta represent the actual pie chart of America? Who cares?”

And he later added…

“Funny is the world I live in. “You’re funny, I’m interested. You’re not funny, I’m not interested. I have no interest in gender or race or anything like that.”

The comment made me imagine if Seinfeld, the NBC comedy series that many feel is the greatest of all-time, could ever survive even one politically-incorrect episode (“The Chinese Restaurant,” “Cigar Store Indian,” “Puerto Rican Day Parade”) in 2014.

No soup for you.

Not a chance in hell.

It may not seem that long ago, but Seinfeld went off the air in May of 1998. Sure, it generated a small amount of controversy with the aforementioned episodes above along the way. But since social media didn’t exist and cable news wasn’t as opinion-based (and fixated on debates over racial issues as it is now), these controversies barely registered a blip.

Seinfeld also wouldn’t survive today because of a lack of diversity. The pie chart was almost strictly white despite the show taking place in the melting pot that is New York. And you didn’t hear a peep about it…

Same goes for the most dominant comedy shows of the 70s and 80s. In the 70s, M*A*S*H (CBS) and Happy Days (ABC) ruled the ratings book. Both had nearly all-white casts. In the 80s, The Cosby Show (NBC), and Cheers (NBC) were tops. Diversity wasn’t exactly a feature those shows, either. And nobody cared…

Why? Because—as Jerry stated, “Funny is the world I live in.” He’s 100 percent correct…Funny is funny, doesn’t matter who is providing the material.

Growing up in the 80s, my two favorite comedic actors both graduated from Saturday Night Live: Bill Murray and Eddie Murphy. Run into me on the street and I’m happy to recite any line from Caddyshack, Stripes, Ghostbusters, Groundhog Day, 48 Hrs, Trading Places, Beverly Hills Cop (the first one, anyway), and Coming to America. It seems like only yesterday my friends and I begged our parents to let us see Raw, which featured Murphy in horrific parachute pants doing stand-up in front of brick wall for 90 minutes. And we loved it.

Never once did it occur to me that my top choices in comedy (a black guy and a white guy) made me politically correct. Well, almost…guess I’d have to throw in Paula Poundstone and Whoopi Goldberg to avoid being labeled a misogynist, or sexist, or anything ending in “ist.”

Just to get ahead of the curve, here’s what you can expect will be coming next to a cable news debate near you (in TV-tease form): “When we come back, we talk to one writer who says TV’s Modern Family ISN’T very modern at all. Why he’s crying foul over the lack of black and interracial couples on the hit ABC show…that’s next!”

All dominant in their respective decades…

All would be doomed for not checking off enough boxes in 2014.

And that Seinfeld guy?