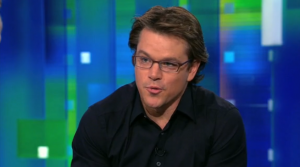 Actor Matt Damon visited Piers Morgan‘s CNN show, taking the time to promote his new movie, The Adjustment Bureau, and… weigh in on Barack Obama‘s ability to govern. Palm, meet forehead. In Damon’s defense (Ed. note: …because I want nothing more than to run with him, hand in hand, along a beach in Aruba. In slow motion. While being 5 foot 8.), the actor was directly asked about his thoughts on Obama’s progress by Morgan after being asked whether he caught Sarah Palin’s Alaska. (Damon answered that, being the father of four daughters, he doesn’t have much time to watch TV.) Damon, you might recall, campaigned for Obama and was once quite a vocal supporter.

Damon’s response, which basically amounted to the actor expressing his disappointment in Obama, seemed articulate and well-reasoned enough, despite our personal apathy regarding celebrities’ political opinions. But his answer, and the fact that he was asked about this in the first place, brought to mind the criticism many celebrities received from the right (pundits and politicians alike) when either thoughtfully critiquing or hatefully bashing former president George W. Bush. A common theme seemed to be that many of those famous actors and athletes doing the bashing were just plain dumb and, as such, their political opinions shouldn’t be taken seriously.

But are celebrities still “dumb” if they criticize Obama, too? There are so many differences at play this time around. For one, there’s the stereotype that actors are all card-carrying members of the Hollywood Liberal Elite, partying it up with Arianna Huffington, sliding down rainbows with George Soros, and ravenously feasting on the souls of Republican babies. So when they repeatedly criticize a Republican president, it’s not unreasonable for some on the right to react with eye rolls and loud musings over why anyone cares about what celebrities have to say anyway, especially so much of the rhetoric against a politician proves redundant, predictable and mean-spirited. Then, there’s the fact that criticism of Bush was so prevalent as to be white noise: Over here, there’s Kanye West accusing the President of racism while standing next to a bewildered Mike Myers, over there is an article where actor Richard Dreyfuss voices his complaints with the Bush administration, and way back over here there’s a post titled “George Clooney (and his dad) vs. George W. Bush.” There simply hasn’t been a united celebrity front voicing criticism of or disappointment in Obama and his administration and so, whenever a celebrity does express disappointment or criticism, it seems the consensus is that it must be the result of some deep thinking and reflection.

We’d love to hear those who dismissed celebrities’ political opinions of Bush as being “dumb” weigh in regarding their criticism of Obama: Are they still dumb?

And, more importantly: When can we get TV show hosts and magazine writers to stop adding to the myth that no one happens to care what a celebrity thinks… unless that celebrity happens to agree with them?

In any case, here’s a snippet of Damon’s interview, via CNN. When you swoon, make sure it’s ever so slightly to the left: