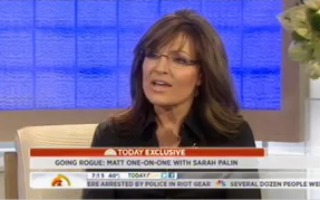 Sarah Palin‘s Today show appearance Tuesday kicked off with an interview conducted by host Matt Lauer, who asked the author and Fox News contributor to share her thoughts on the GOP primary race — and offer advice for whomever the future VP nominee should happen to be.

Calling Romney the race’s “obvious front-runner,” Palin maintained that “anybody but Obama will be so much better for our country.” When Lauer pointed out that Palin didn’t necessarily seem happy with Romney as the presumptive nominee (she has, in fact, shown support for Newt Gingrich), she reiterated “anybody but Obama. I honestly believe that anybody running on a GOP ticket would be infinitely better than what we have today, with these failed socialist policies.”

RELATED: John McCain Reacts to Palin On Today: ‘If You Live Long Enough, Anything Can Happen’

Talk later shifted to the economy, with Palin saying that it has only improved “maybe for those some on Wall Street. But not for the millions still unemployed, not for those whose houses are underwater, not for those who are having to settle at this point with a job that is not fulfilling for them financially.” When Lauer pointed to an uptick in jobs and a healthier stock market, Palin noted that “we still have fewer jobs today than when Barack Obama took over. And we have debt being incurred at $3 million a minute. Our government is spending too much money, and people are understanding that we cannot keep going down the path that we’re headed.”

“Even the speaker of the house…” Lauer responded. “I sat down with him, John Boehner, last week. I said is the economy improving? He said yes, it is. And I said, so how do Republicans run against an improving economy? He said, ‘You say, it should be better.'”

“It should be a lot better,” Palin said, later adding that “things aren’t getting better fast enough.”

“If Mitt Romney is the nominee,” Lauer then asked, “one of the first real major decisions he’ll have to make is on a vice presidential candidate. When you were plucked from obscurity in 2008, you’d been Alaska’s governor about two years. You didn’t have any real experience on the national stage, and in this era of intense media scrutiny, you took some lumps. You had mixed results, as we all know. Do you think, if Mitt Romney is the nominee, he should choose someone with more experience on the national battlefield than you had at the time?”

Well, you know, I would put up my record as a CEO of a city, of a state, as an oil and gas regulator, up against any of the other potential GOP vice presidential nominees last go-around. So you know, I’m proud to stand on my record as a private sector and a public servant CEO. […]

I would say it doesn’t matter if that person has national level experience or not, they’re going to get clobbered by the “lamestream” media who does not like conservative message. And it doesn’t matter if that person has been a known commodity to the mainstream, lamestream media or not, the GOP ticket, to tell you the truth Matt, doesn’t know what’s coming. They don’t know what’s going to hit them in terms of double standards applied to them and the positions that they hold and the records that they are running on, from personal family issues to anything else. […]

What I would advise Mitt Romney, or whomever the nominee would be, is don’t necessarily play it safe, and do just what the GOP establishment expects them to do. And that is, to get somebody kind of just going along to get along, not willing to ‘go rogue’ and get up and say that we need relentless, and we need sudden reform of our government to put it back on the side of the people.

Before turning things over to Ann Curry, Lauer warned Palin that her co-hosting duties at NBC very much make her a member of the “lamestream media” now. Have a look, from NBC: