Matt Lauer Presses Romney on 2016 Election: Will You ‘Ride in on a White Horse’ to Save the GOP?

Matt Lauer Presses Romney on 2016 Election: Will You ‘Ride in on a White Horse’ to Save the GOP?

Lauer Presses Romney: Will You 'Ride in on a White Horse' to Save the GOP?
Twitter share button 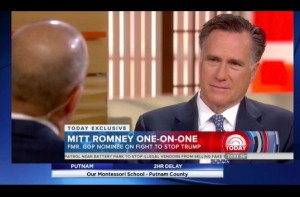 A day after his unprecedented press conference aimed directly at taking down the wildcard Republican frontrunner, former Massachusetts Governor and GOP party nominee Mitt Romney was cornered Friday by TODAY’s Matt Lauer about his own chances of entering the race.

If Donald Trump — the current frontrunner by a wide margin — does not collect the necessary 1,237 delegates, the RNC convention in Cleveland in July would take on a new level of significance. Lauer pushed Romney on the chances of entering the race at the brokered convention stage, asking, “Have you left the door open just wide enough for you to ride in on a white horse? Do you want to be considered as an alternative to save the party if it gets down to a contested convention in July?”

“No, no,” responded Romney, offering, “The people who can save this party are Ted Cruz, Marco Rubio, or John Kasich.”

Lauer was clearly not satisfied with the response. “I’m going to be a little stubborn on this… under any circumstances, would you be a part of this Presidential election as a candidate?”

Romney’s initial answer to this follow-up was dubious at best, as he responded with, “There are no circumstances I can foresee where that would possibly happen.” The exchange followed as such:

LAUER: I can foresee?

ROMNEY: No reasonable scenario I can imagine.

LAUER: Just slam the door on it. Close the door. Unambiguous: you will not run for President.

ROMNEY: I’m not running for president. And I won’t run for President.

Romney has been extremely critical of Trump, frequently taking to Twitter in recent weeks to slam Trump’s candidacy. It was also Romney who first hinted that Trump’s refusal to be fully transparent regarding his tax returns possibly indicated a “bombshell” of some sorts regarding his wealth, and the two have publicly exchanged blows ever since. Yesterday, Romney spoke bluntly about the real estate mogul: “A business genius he is not.”

Trump continued his attacks against Romney yesterday afternoon in an address from Portland, Maine. “I backed him,” said Trump, referring to the 2012 Republican campaign. “You can see how loyal he is. He was begging for my endorsement. I could have said ‘Mitt, drop to your knees.’ He would’ve dropped to his knees.”

Check out the above video from NBC.
[image via screengrab]