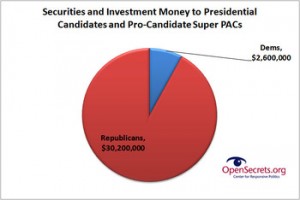 On Monday’s Now with Alex Wagner, the subject of Our First Gay President, Barack Obama, touched on John Heilemann‘s assertion, in New York Magazine, that “with Wall Street having largely dried up as a source of largesse,” Big Gay has become a huge pillar in the President’s fundraising apparatus. Rolling Stone‘s Matt Taibbi disagreed that Wall Street has abandoned Obama, and when host Alex Wagner gave him the facts, said “I don’t believe that.”

Here’s what Heilemann said about the President’s gay marriage evolution revolution and fundraising:

With Chicago terrified by the almost certain prospect of being outspent by the cumulative forces of the Romney campaign and its conservative Super-PAC allies, and with Wall Street having largely dried up as a source of largesse, the campaign has turned increasingly to three sources of big-donor dollars: Holly­wood, Silicon Valley, and the gay community. (Amazingly, reports the Washington Post, fully one in six of Obama’s bundlers reside in the last ­category.) From all three of those wellsprings, Obama’s ­embrace of marriage equality is likely to pay dividends—literally.

Taibbi is known for being something of an iconoclast, but when confronted with Heilemann’s thesis, he resorted to uncharacteristic dissembling. “I totally disagree that Wall Street has completely dried up as a source of largesse,” Taibbi said, then cited a completely irrelevant fact. “Obama has a two to one fund-raising advantage over Romney as we speak.”

It’s like Taibbi took an accidental overdose of Rove-zac. Not only does that statement ignore the fact that the subject was Wall Street donors, as opposed to the entire universe, Taibbi seems unaware of the huge disparity in SuperPAC donations that will likely place the two candidates even, or put the President behind, by the end of this campaign.

When host Alex Wagner served up the fact that “Wall Sreet dollars, 92% of them are going to Romney or Romney SuperPACs,” Taibbi just shut his eyes.

We’ll get to that in a minute. Taibbi added “Wall Street heavily favored Barack Obama by almost two to one in the last election.”

About that, Taibbi is essentially correct, and that’s important for two reasons. First of all, it shows that Wall Street obviously feels it didn’t get what it paid for in President Obama, which ought to be seen as a positive. The second is that the stat he cites is from data that is apples-to-apples with the one he disbelieved from Alex Wagner, totals of bundled contributions from Wall Street (from OpenSecrets.org):

Let there be no doubt where Wall Street’s political loyalties lie: Of all the money the securities and investment industry has poured into the 2012 presidential contest so far — to the candidates and the super PACs behind them — an unambiguous 92 percent has gone to the GOP, according to a new Center for Responsive Politics analysis.

And in so doing, the securities and investment industry is betting hard on the candidacy of one of its own: Mitt Romney.

Between his campaign committee and a monster super PAC supporting his candidacy, Romney has benefited from about 72% percent of the near $33 million Wall Street has contributed through February.

There are a lot of ways to slice and dice the numbers. The President obviously still has some support from Wall Street, so you’ll probably hear his opponents quote raw dollar figures that sound big if you don’t look at what Romney’s campaign and SuperPACs are getting, but the contrast could not be clearer.

What’s also strange is the way Taibbi insists that the President “was outed by Joe Biden essentially. They weren’t going to do this til Joe Biden started flapping his gums in front of a reporter.”

It’s true, they weren’t going to do it last week, but no reasonable observer thinks that the President wasn’t going to announce his support for gay marriage at all during this campaign. Taibbi criticizing the President is nothing new, but doing it like a blogger on Fox Nation certainly is.