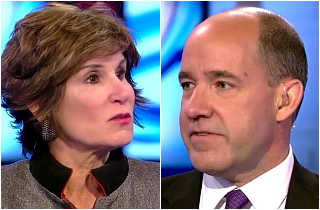 On This Week With George Stephanopoulos, a debate about income inequality turned into an argument between ABC political analyst Matthew Dowd and Republican strategist Mary Matalin over the tea party’s role in the GOP, specifically as it relates to the party’s potential to adopt a more populist approach.

“I think the Democrats and Republicans are trapped in an old mantra,” Dowd said. “They would be so much benefited if they adopted some of Elizabeth Warren’s message, and say the big corporations, the big banks in Wall Street have taken us down this path, along with a ‘Washington not fixing the problems.’

“Democrats, on the other hand, have an anti-Wall Street, anti-big bank, anti-big corporation, but they’re stuck in an old mantra saying the government needs to solve this problem. If somebody came along and said, ‘I’m going to bridge this, and it’s about Washington isn’t doing the job, Wall Street isn’t doing the job, we need back to middle America.'”

“You know who is doing that?” Matalin said. “The tea party and [Senator] Ted Cruz (R-TX)…On the continuum of Cruz and [Senator] Rand [Paul] (R-KY)—I know you don’t like [Paul’s] Detroit project, but it’s better than another bailout—they are proposing exactly what you’re saying.”