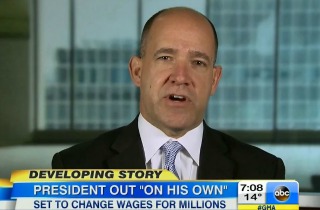 Leave it to a former speechwriter to be the last person still clinging to the “one great speech” fallacy. Long after even President Barack Obama’s supporters abandoned the canard that suggests the president can orate his way out of any predicament, apparently former George W. Bush wordsmith and Good Morning America contributor Matthew Dowd refuses to give up the ghost.

Obama delivers his fifth State of the Union Address tonight in decidedly suboptimal conditions. This word cloud, via the latest Wall Street Journal/NBC News poll, shows how most voters view the state of the American Union:

In short, it’s not good. But the value of the pundit class increasingly lies in mythmaking and blame-shifting designed to shield those in power from deserved criticism.

Appearing on GMA on Monday, Dowd noted that Obama faces nearly the same list of problems Bush faced at this point in his presidency: namely, ailing faith in the macro economy and voters’ individual economic wellbeing. To address the public’s general pessimism about their outward conditions, Dowd recommends Obama attempt to reestablish the voters’ faith in themselves…

“Even though he gives a great inspirational speech, he has to convince the players that they can win and then they have to follow through on play after play, and so I think the speech is as important as the follow-through and the aftermath,” Dowd began.

“So what’s the single most important thing he can do tonight?” host George Stephanopoulos asked.

Dowd has set an impossibly high bar for Obama to crest tonight. Faith, or “trust,” in government has been waning now for more than a generation. In fact, we can quantify it.

Using Pew Research Center’s data going back to 1960, we see faith in government has been ebbing for decades, only briefly spiking after September 11 attacks and during the first Gulf War. 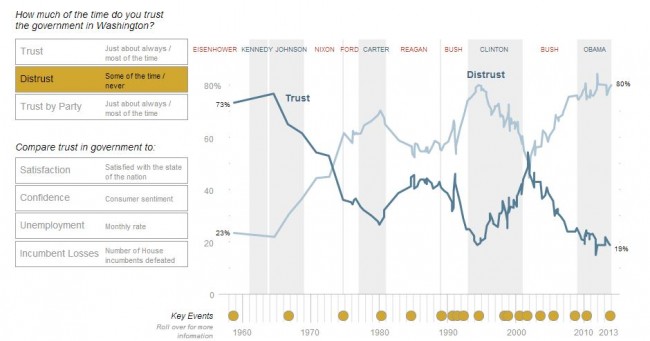 For a problem this indelible, giving a speech is about the least effective means of address one could recommend. In fact, it’s entirely possible that speechifying – the signature of the Obama presidency and this White House’s default response to any given problem in lieu of an actual solution – may at this stage merely contribute to the public’s general antipathy toward government.

Only a member of the pundit class, for whom words are the currency of the realm, would recommend a speech to address the public’s earned mistrust of government. The results-oriented strata of American society, which finds its paycheck tied to outcomes rather than intentions, might recommend implementing policies that actually function and scaling back the mission of this mistrusted institution to that which it can accomplish successfully. But results-oriented folks don’t get paid per word. For them, a good speech is an end in itself.

That mentality, celebrated as it is inside the Beltway for its ability to excuse any manner of failure, may contribute in its own way to the public’s ever-fading trust in Washington D.C.